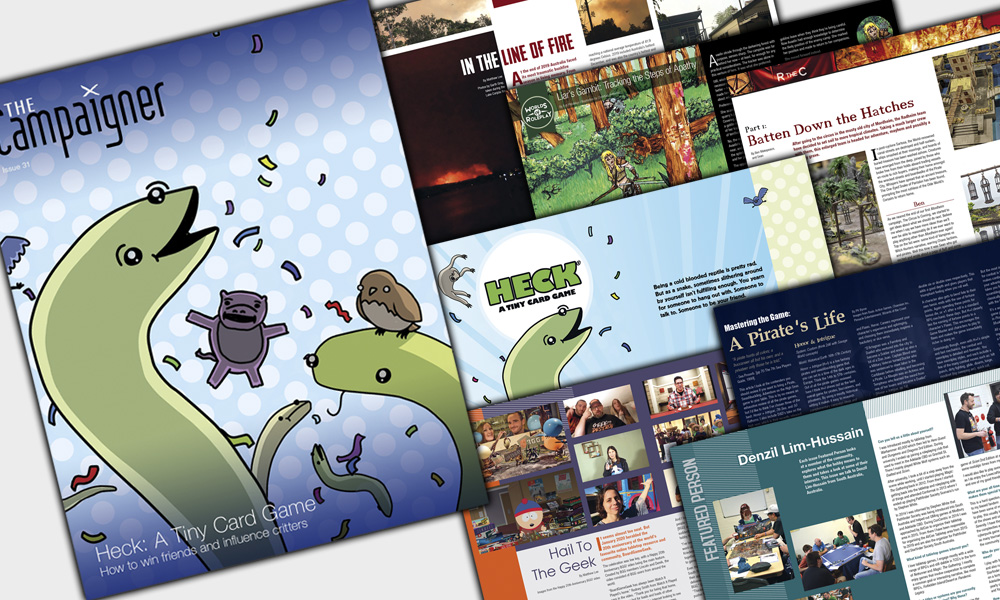 Want to make friends with snakes and other critters? You can in Issue 31 of The Campaigner.

Join us as we discover the hidden life of these animals in our game feature on Heck: A Tiny Card Game. Co-creators Jason Anarchy (Jason Anarchy Games) and Alex Cohen (Tiny Snek Comics) break down how they developed the title, and where it fits into the Tiny Snek universe. The bushfires ravaging Australia over the 2019-2020 period caused loss of life and damage to homes of both humans and animals. We look at some of the tabletop community who have helped to raise funds for bushfire relief, while we also gain some insight into living through one of the bushfires with recollections and photos from Garth Gray, in In The Line Of Fire. What is possibly the worlds most popular tabletop website, BGG, celebrates its 20th Anniversary this year. Find out what the celebrations have been like in Hail To The Geek. PK Byron explores the high seas in the latest instalment of Mastering the Game, A Pirate’s Life. While the Radheim team join the swashbuckling adventure as they begin their pirate-themed Mordheim campaign R the C with the first part, Batten Down The Hatches. Worlds of Roleplay continues, with one of our new heroes facing off against an ambush in Liar’s Gambit: Tracking The Steps of Apathy. We round things off with our Featured Person, Denzil Lim-Hussain, as he talks about his involvement in tabletop throughout South Australia.

All this plus news and more. Available now in print or digital.