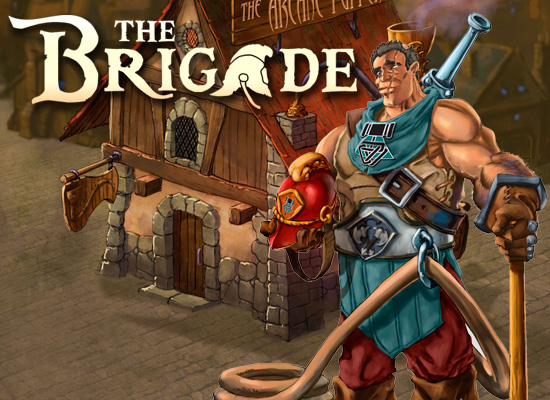 Building a town around the volatile pyromancer university wasn’t such a good idea. Who would have thought it? Now fires are burning all around the city. What’s worse is the Fire Chief has gone missing! Though, this is a great time for an enterprising Warden to claim the top job. After they have put out a few fires, and won over the populace, of course.

The Brigade is a board game for 1-4 players. In it players take on the role of a Fire Warden and their crew, as they travel around the town of Tinderbox extinguishing fires and saving the day. Unfortunately, at the centre of town is a pyromancer university, so fires flare up in random areas with alarming frequency. However, the player can upgrade their crew to allow more members, additional actions or to carry more water.

Play happens on a randomly generated map. Tiles are shuffled and placed around four tiles representing the university. Cards showing the spread of fire are drawn, and then players take turns activating their crews. Each crew carries water, which it can spend to decrease the severity of fires. Successfully bringing a fire down allows a player to place Renown tokens on nearby tiles, with tiles becoming Loyal when tokens equal to the locations value are placed on them.

The game continues until a player makes either five of the same building faction, five different building factions or three university tiles loyal to them. Alternatively, if the city burns down or is cleared of fires, then the player with the most Loyalty on the board wins. 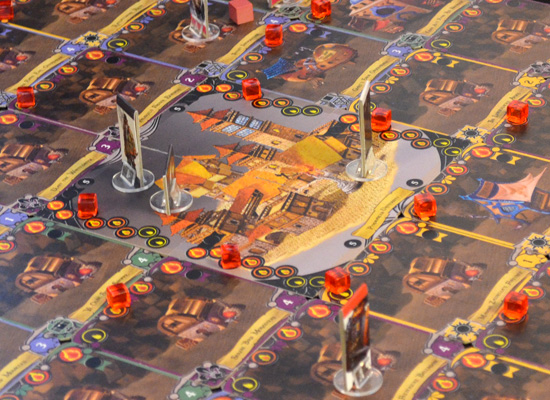 On the surface the game play is quite straight forward. Fires get worse, and players race to put them out. Ignore a tile for too long, and it is destroyed. What is interesting is how the few simple mechanics all work together to create a much more complex game environment.

Players are never sure when and where fires will worsen. While they are scrambling to douse the flames, there is some merit to letting the inferno linger. Putting out a bigger fire provides the chance to place more Renown. However, while a player may be leaving a tile until just the right moment, another crew can swoop in and disrupt the plan.

What this means is that there are a lot of tactical elements to The Brigade. Players won’t just be concerned with their crew and the closest fires. They will also be weighing up the options of pursuing their own agenda or disrupting those of the other players. With the ability to perform multiple actions a turn, as well as upgrade a number of abilities, it means that The Brigade is a fast paced and engaging game with a lot of replayability.

The Brigade is being designed by Ben Hoban and Alex Wynnter from Red Genie Games. A Kickstarter for The Brigade should be available in June this year some time. Keep an eye on The Campaigner for more news on The Brigades launch on crowdfunding.

1 thought on “The Brigade preview”