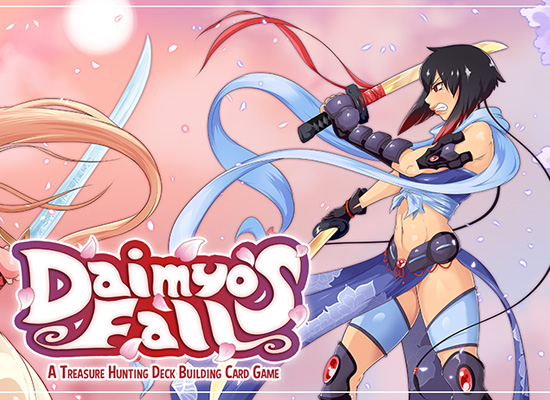 Tragically and suddenly, the Daimyo of Yamashiro has died. Then mysteriously, the males of the land disappeared soon afterward. The daimyo’s palace lies deserted, his treasure unclaimed. Locals dream of the Daimyo, who tells them that they have until the last flower falls from the palace cherry tree to claim rulership of the land. Can the women of Yamashiro answer the call, and lift the curse?

Daimyo’s Fall is a competitive deck builder for 2-5 players. Players rush to collect treasures before the last petal token is removed. Whoever has the most points at the end claims the title of Daimyo, and wins.

Each game players start with a small deck. In a common area, called the Domain, are six decks. These contain reinforcements which can be purchased, as well as treasures which can be captured. Cards pulled from the domain go into the players discard pile, and are made available when their deck runs out.

This makes spending cards an attractive prospect, as it means you are feeding more options into your deck. And it doesn’t matter if you spend cards, as victory points are calculated from all cards you possess, whether in your deck, hand or discarded pile. 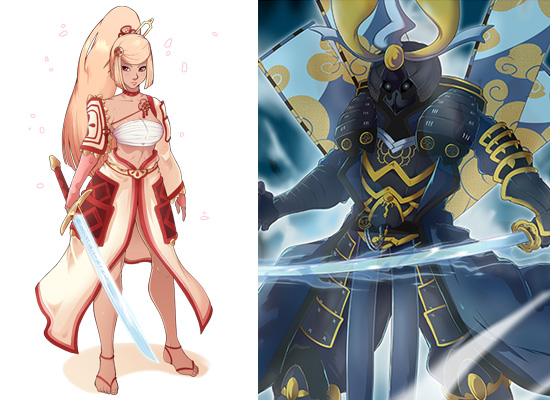 Tactically there appear to be a lot of option for players. There are eight actions to choose from, and players can chain card effects to increase the number or effectiveness of the actions they have. It looks like this promotes a long term view of the game, encouraging players to pay attention and construct their decks to maximise what they can do, and when they can do it.

Players can also affect each other in a more direct manner. Duels can be instigated, where players’ heroes fight each other. Cards are spent to boost the hero’s powers, with the loser becoming Exhausted. This means that it takes longer for the hero to enter the discard pile as it spends time recovering.

The fundamentals of Daimyo’s Fall sound quite interesting. Gameplay seems to contain real decisions for players, which primarily focus on how they are spending their resources as well as what judgement calls they are making concerning their deck.

Each round a new hero is revealed, which depletes the petal store. Petals are also depleted when players purchase heroes, so I am not sure how long a game will go for. There are 50 petal tokens in the game, and the booklet says approximately 60 minutes of play time. 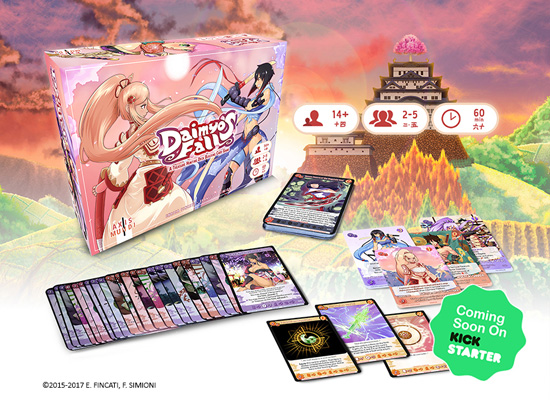 While the game play sounds engaging, I personally think an hour is asking a bit much. Given everything players are keeping track of, 40 minutes seems like a more reasonable time frame. However, I’m not heavily into this kind of deck building game, so those players more interested in the genre will probably be quite happy with 60 minutes.

I’m also not completely sold on the games back story. Having all the males of the region disappear seems like a flimsy justification for having mostly female-centric illustrations. I didn’t get to look at the cards themselves, only those cards and artworks which appear in the rule book. But the bulk of the illustrations feature females, largely in a collection of revealing attire. So I can only assume that this weighting is carried over into the cards.

Even with that taken into account, the game play and overall theme of Daimyo’s Fall sounds interesting enough that it is worth a serious look at. I’m sure those firmly entrenched in the competitive deck building genre will find a lot of enjoyment in the game, as they push the mechanics to its limits. While more casual players will enjoy the act of custom building their deck while constantly managing their deck, hand and discard pile.

Daimyo’s Fall is being designed by Enrica Fincati and Francesco Simioni, and should be on Kickstarter soon. You can find out more about Daimyo’s Fall on the website.