Mecha Strike Arena came out about a month ago. In this new video Matthew discusses an aspect of the game which he is particularly impressed with.

In Full Effect by Johnny Cashpoint
Satellites by Sherlock Homo

As some of you may know, I used to be really into tabletop wargames. A number factors have influenced why wargames have dropped off my gaming schedule in the last few years. I briefly tried to pick it back up a while ago, played some of the current version of Warhammer at the time as well as tried out Warmachine and a couple of others. But a combination of things meant I didn’t stick with it. One of the factors was that I either had to drastically alter my current Warhammer force, or begin anew in a new system. Either option was going to cost me money and time. Two resources which are scarce nowadays.

Which is why Mecha Strike Arena interests me so much. Mecha Strike Arena, in case you don’t know, is a skirmish tabletop battle game where players pit massive robots against each other. It focuses on movement and objectives, which makes the game quite dynamic. The games designer, Terry Masson, is from Australia.

Most wargames that come out have an official line of miniatures or models that accompanies it. Historicals get a little leeway, but the others generally try to keep the models used along with their system ‘official’. This is especially prevalent in games with tournament or competitive aspects. The intent behind this makes sense, that everyone is on a level playing field, being in the same rough scale and size. But in practise it means you can be limiting your player or customer base due to cost, availability and other factors like that.

What Mecha Strike Arena does is detach the concept of your models area from the model itself and applies it to an external indicator. What this boils down to is that there are ‘volume’ templates for the different classes of Mecha, which players use to calculate whether the model is seen. So the ‘game area’ of the model, and the model itself, and not directly associated. This means that it leaves the door open to allow for much less specification within the rules of what the model actually is. And it is this aspect that I really like.

The reason is because of how open this makes the game. My Mecha Strike Arena model fits within the Large Mecha template, and on a Large Mecha base, making it a large Mecha. It is completely game-legal because it fulfils these two considerations, so I could use it with impunity in social games or even competitive tournaments.

I bought it from a regular retail shop, in this case The Reject Shop, here in Australia. It only cost me $2. Some work has been done on it, tracking down a sword from another cheap toy, as well as going through my bits box for a slightly beefier gun, but overall this model is completely game legal and cost me less than $5 to put together. 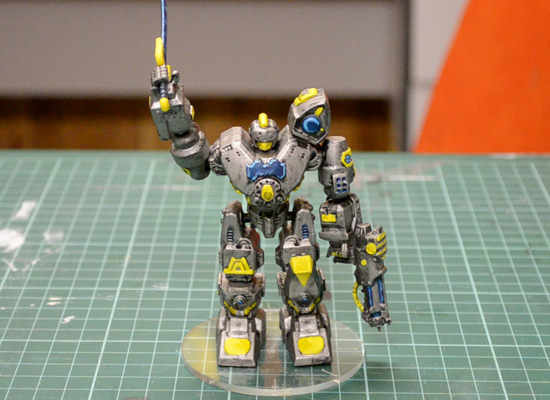 The thing is, in Mecha Strike Arena, you only need one Mecha model for each person in order to play. So it should be very easy for someone to build up a selection of models to use, which represent the different Mecha types of Walker, Rover and so on. And all for less than it costs to buy one Assault Squad of Space Marines, for example.

It didn’t take me long to put this together, a couple of afternoons of converting and painting. So it will take no time at all for someone to cobble together a couple of models to try the game out. Which I recommend you do, it’s a lot of fun.

I really like this approach. It brings the creative aspect of converting, or kit-bashing, directly into the game. And you don’t have to fill the template, the model could be slightly squatter, or a couple of heads taller. Because the silhouette of the model doesn’t affect the area template in any way. So you can cover your Mecha in all kinds of flags, wings and whatever other ostentatious details you want without it negatively affecting your models playability.

For someone like me, for whom wargames were as equally about doing cool conversions as it was the game itself, this makes Mecha Strike Arena extremely attractive.

Leave a comment letting us know what you think about the idea of an ‘open model’ approach, or if you have a Mecha you have made up for the game, why not show it off?

You can download the rules from the Dare Games Oz website, and if you like the game, back the Patreon to get access to regular print-at-home cards and scenarios, and whatever else Terry decides to chuck on there. You can also read a short interview with Terry, about the basics of Mecha Strike Arena as well as the Patreon, on The Campaigner website.