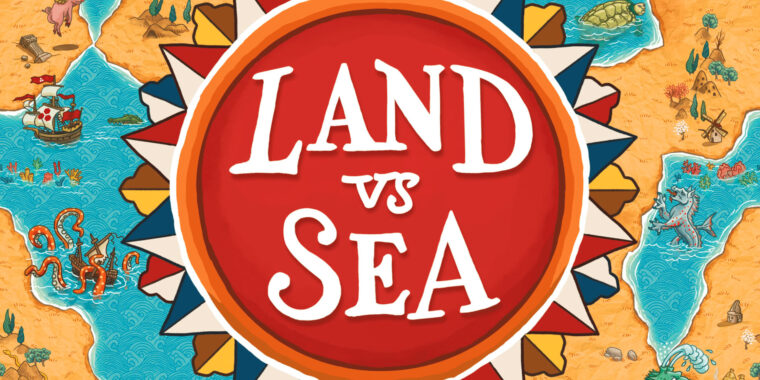 We have seen many great conflicts on the tabletop. Empire versus Empire. Brother versus Brother. Even Tree versus Tree. Now we can add another epic and timeless struggle to those we can experience: dry land versus large bodies of water.

Land vs Sea is a tile placement game for 2-4 players. How many players there are changes the gameplay in some significant ways, but all versions revolve around the same core process.

At the start of the game each player is allocated either Land or Sea. The hexagon tiles contain portions of land and water, and players are tasked with placing these tiles to form independent islands or seas. Each completed area means points, and the player with the most points wins the game.

The publisher, Good Games Publishing, has been pushing the idea that Land vs Sea is incredibly quick and easy to learn. This isn’t hyperbole; it really is that easy to understand the fundamentals of what you need to be doing. Legal tile placements need to match like-edge to like-edge. So a land edge cannot connect to a sea edge. Simple as that. But the game itself isn’t quite that basic.

Players start the game with two tiles. Each turn they will be connecting one of their tiles to the play area, and then drawing back up to 2 tiles from one or both of the two tile stacks.  Some tiles are just, well, tiles. While some have an additional action associated with them, denoted by an icon. These two actions are Play Again, allowing the player to place their second tile onto the play area, and Steal, allowing the player to take one of their opponent’s tiles.

Each tile is double sided, with different land and water formations on both faces. They are covered in charming or ironic marginalia inspired details, but also contain important (and in some cases optional) gameplay elements. The first being bonus points; small cross icons which provide additional points to finished areas. 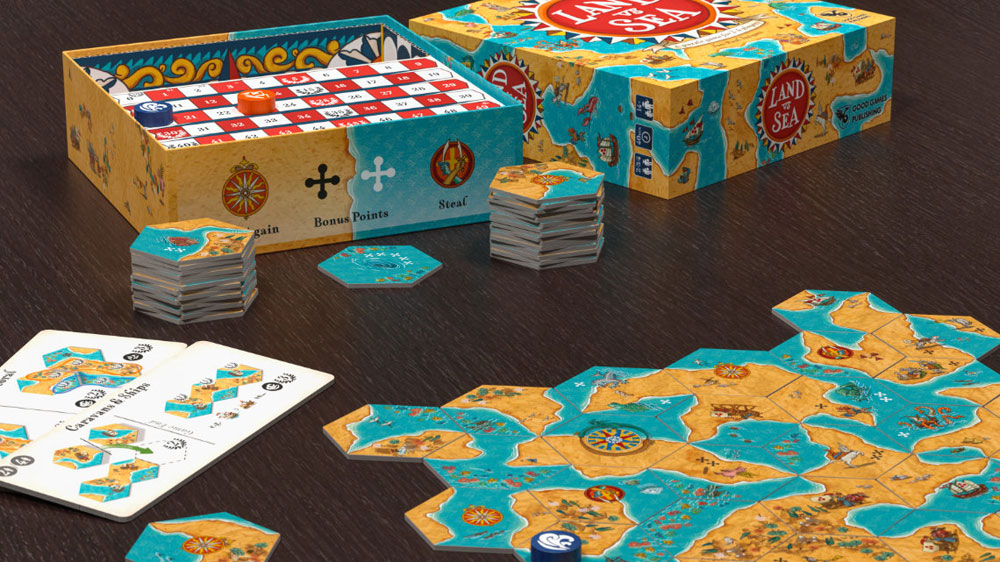 Then there are the additional scoring options, which can be added during the setup of a game as the players seem fit. The Mountain & Coral option lets players amass points as mountain ranges or coral reefs are connected, with the points going to the respective Land or Sea players. Even if that player didn’t connect the mountains or coral. The larger the range or reef, the more points it awards.

While the Caravan & Ships option has players connecting trade routes on both land and sea. Placing a tile which connects to an existing route nets a player points. At the culmination of the game each trade route is assessed. If there are more caravans in the route, the Land player scores it. More ships, the Sea player scores it.

Lastly is the option to use Waypoints. Each player has a token, which they can place onto the play area. It is returned to the player when the area it represents on the tile it is placed is completed, or the tile it is on has tiles connected on all six sides. This token confers an additional point to the player who caused its return.

The gameplay process, as well as the optional rules, are applied in this way to both the two player and four player versions. In the case of four players, there are two Land and two Sea players working together as a team. Three players is slightly different. The gameplay of placing tiles down and utilising optional scoring options still stands. But in this mode as well as Land and Sea players is a Cartographer player.

The Cartographer isn’t associated with either Land or Sea, and so the three player versions success really hinges on including all the additional scoring options. How the Cartographer scores points is probably best described as ‘working between’ the other player’s goals. When the Cartographer completes an area they score bonus points as normal, while the points of the area go to the respective player.

This makes the three player mode not overly different in a mechanical sense. But it does change the motivations of each player and how they approach their tile placements. 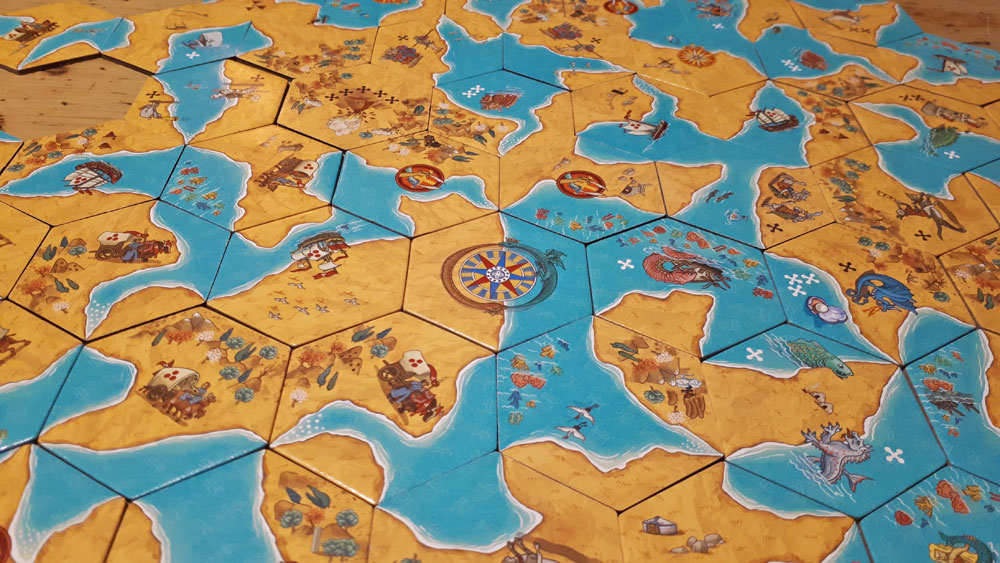 The most impressive thing about Land vs Sea is that is has a solid yet simple core mechanic that, even on its own, delivers a fun and easy to learn game. It’s incredibly quick to teach, relying almost solely on people’s universal understanding of how to differentiate between an area of land and a body of water. So there’s no need to get people into the thematic headspace. They are probably already there.

Having optional scoring parameters is also a terrific idea. The intensity of the game can be edited to suit the atmosphere each time it is played. Looking to get in some quick games in a short amount of time? Just play the core rules. Experienced players looking for more of a challenge? Bring every option to the table. It does make the game highly versatile in how it can be implemented in most settings.

All this is marvellously supported by the detailed and quirky tile illustrations. They give the connected tiles a ‘ye olde’ map feel, without resorting to sycophantically focussing on medieval English imagery. The cultural inspirations appear to be quite varied, as are the pop culture references. So as well as a fun and tactical game, players also end up with a pretty impressive looking map.

I honestly do believe that Land vs Sea is a great game. In certain circumstances.

As a two player experience I can’t fault it. It has a good pace, interesting decision making, and the tile powers have a pleasant short term but meaningful advantage feel to them. Four player possesses the same qualities, but in a little bit of a less elegant package. Playing alongside someone is nice, but you aren’t really working towards something definitive together. Though it can still be just as fun as playing one-on-one.

Three player is a little bit of an odd duck. Mechanically it works fine, and the Cartographer is an interesting interpretation of the role players are usually slotted into. But the way the mode cannibalises some elements and doesn’t others means there is some adjustment to how players approach the game. An adjustment which some players may find too jarring.

I’m not saying the mode is bad. Or not to try it. When you do, though, be aware that three players will probably interest a thinner slice of players than either two or four does. So it is going to be a far more situational option for bringing Land vs Sea to the table than the others.

There is one other aspect that is rather odd. But I don’t think it is any fault of the design or implementation. I don’t have anything to back this up, apart from my own observations, but I feel compelled to mention it briefly. I’ll explore this idea in more depth soon, I don’t think it’s fair to burden the review with my wild, uneducated, interpretation of psychology. Still, it seems important to point this out as a potential issue for a small, small, number of players.

Some people may, in my opinion, initially find playing as Sea harder than playing as Land. Even if they have already played previously as Land, and are familiar with the game. I think it has something to do with how people are interpreting the bodies of water.

That’s it, my dumb theory, that I have no proof for. Take it with a grain of salt.

Land vs Sea is a simple idea that successfully delivers an amalgam of good fun and easy understanding.  The tactical aspects can be added as players see fit, and I’m sure groups of people will quickly discover their preferred configuration of how they play. An outstanding two player experience, there are those who will find just as much enjoyment in the three and four player options. But I guarantee they will keep coming back to two players whenever possible.

Land vs Sea is designed by Jon-Paul Jacques and published by Good Games Publishing. It came out late 2021, and quickly became unavailable at most retailers. It has recently received a second printing and is available now in stores or online.