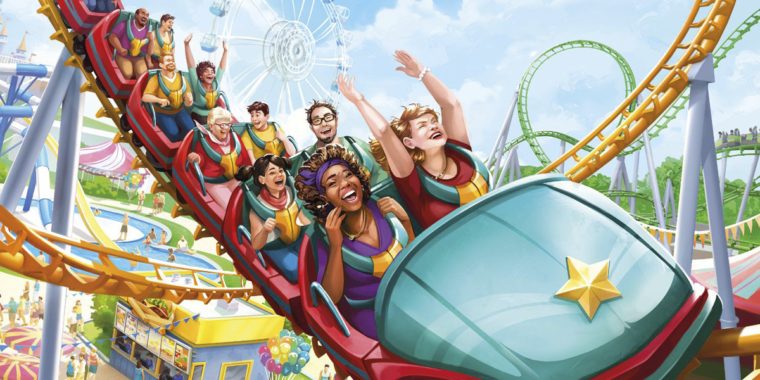 You run a funfair. Your opposition runs a funfair. You both love funfairs. So you help each other out. Afterward, everyone goes out for ice cream. Because you are all great friends.

Funfair is a 2-4 player tableau building game which includes elements of set collection and variable objectives. Each player is tasked with building a funfair, which at the end of the game will be used to score points and decide a winner. It is designed by Joel Finch, with illustrations by Mr Cuddington, and published by Good Games Publishing.

The game revolves around the Park cards. This deck contains the locations, upgrades and employees players will need to construct their tableau. Each card has a build price, which the player pays to add the card to their park. Many Park cards also have a Star value, which is what is used to generate income, and ultimately, final scoring.

Everyone starts with a Main Gate, an unrevealed Showcase card, and a hand of five Park cards. The Main Gate is what is used to build the tableau around, while also handily providing the player with their first source of income. The Showcase card contains a particularly impressive, and expensive, location which grants the player an additional turn. Not only that, it becomes cheaper to build as the game progresses.

Play is broken into six rounds, with each containing three or four opportunities for players to perform actions. At the start of a round a City card is revealed, giving all players some kind of bonus, which is usually distributed by the players themselves. After which players take turns building cards from their hand or the market, taking a Park or Blueprint card, or collecting loose change.

Blueprint cards are optional objectives players can complete for extra end of game points. Their requirements vary in difficulty, and so the points reward they are worth are also broad. But no matter the Blueprint, failing to fulfil the card at the end of the game results in points deducted. There is also an Award card which provides a group objective players can complete to score additional points.

Parks will be built from five types of attractions. These can be upgraded to offer additional Star value. Building some cards provides an immediate bonus, such as drawing a new Park card. Employees can also be hired, who provide bonuses in certain steps of the rounds or in end game scoring.

If you have played Unfair, all of this will sound very familiar. Which isn’t surprising, because Funfair is built from the bones of Unfair.

This is not a sequel or expansion for Unfair, rather, it is more like a companion to the Good Games Publishing title. One which takes all the interesting complexity of Unfair and distils it down for a far more general audience.

The difference in naming conventions, Unfair and Funfair, isn’t just for show. Where Unfair directly pits players against each other, Funfair has players more positively interacting with their opponents. This primarily happens with the City cards, as players are often given the task of deciding what boons one of their opponents are getting. Of course this can be twisted to the distributing player’s advantage, but in a far less confrontational way than Unfair’s player interactions.

Where Funfair really impresses though is with its sense of purpose. It knows what it is, and who it is for. It is squarely aimed at players who enjoy light, friendly games and are not overly interested in a highly competitive experience. This is most embodied by the way the theme, that of funfairs, is so seamlessly integrated into the gameplay.

Regardless of their history with tabletop games, everyone knows what a funfair or theme park is. Even if they are not overly into them. So when a player sits down and the goal, “you want to build a funfair”, is explained they can immediately understand what they are trying to achieve. The game mechanics support this simple premise; that players need to add attractions and upgrade them to make them better.

The simple core is excellently supported by straight forward mechanics, and very sensible card designs, which facilitate quick and interesting gameplay. It’s fun to watch your park grow, and see the personality that emerges as you add attractions. And with a nice selection of attractions and upgrades available, it’s easy for players to craft a park that is wholly their own.

This gameplay experience is supported by some excellently designed and manufactured box contents. Keeping track of your park is a breeze thanks to smart card layouts that stack added upgrades without taking up too much table space. While the cards themselves are vibrant and easy to tell apart. The game board is double sided, to suit different player seating orientations, and the step marker is easily visible as it stands over the largely flat play space. 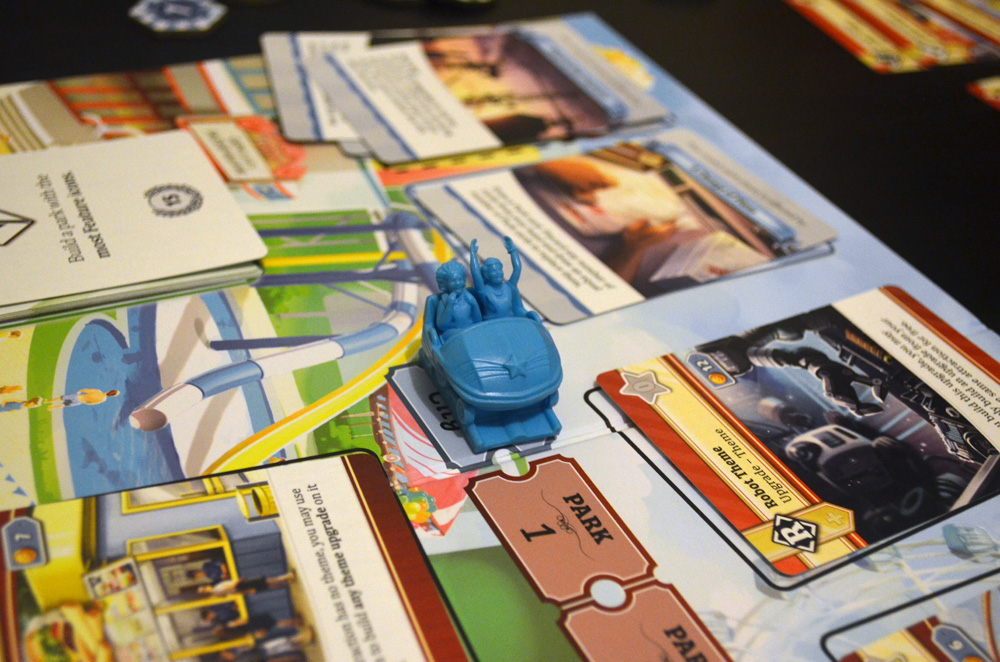 While incredibly well done there are some elements which my trip up less experienced players. The rules around upgrade restrictions and duplication are straight forward, but those not accustomed to management like this can easily miss making illegal additions to their park. Also, for all the simplicity and enjoyment of the game itself, the end game scoring can turning to bit of a boring process. An app is offered to take some of the load off though, which is nice.

Funfair is one of those rare games for which gameplay and theme are inextricably linked. Rather than this causing one to be lesser than the other, the whole experience flows seamlessly. This melding creates a game which is incredibly easy to teach and learn, as understanding conceptual elements translates into gameplay action.

The game is firmly aimed at those beginning in tabletop games, or who generally prefer lighter experiences. Players with a leaning more towards Unfair will probably quickly tire of Funfair. But they can probably use Funfair as a primer to introduce or ease prospective players into Unfair, while also getting to play something which somewhat challenges them.

Overall Funfair has a real feeling about it that it knows what it wants to be, and for whom. And it achieves this goal in a way that is rewarding and fun for players to interact with.

Funfair will be available in retail and online from 27 January. You can find out more about the game on the Good Games Publishing website.