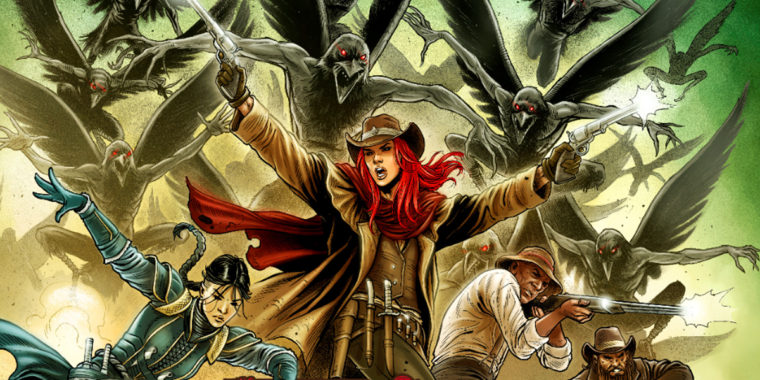 Get your chaps on, dust off the Stetson, clean your revolver and saddle up your trustiest horse. There are otherworldly, and worldly, horrors to face out in the wilds when I took a look at The Few and Cursed.

The game puts the player in the shoes of a Curse Chaser. Bad hombres who explore the desert of the Pacific Ocean, helping (or hindering) those in need, hunting bounties, and capturing magic artefacts. All to become the most famous, or infamous, Curse Chaser out there.

My experience of the game was delivered by the designer Mike Gnade, from the publisher Rock Manor Games, via Tabletop Simulator. As well as designing The Few and Cursed, he has also been responsible for Rock Manor Games other titles like Brass Empire and Maximum Apocalypse.

When first seeing the game what immediately struck me is how thematic it looks. The central board is well illustrated, offering a variety of objects and textures which immediately evokes feelings of exploration or treasure hunting. Cards have a back design which blends poker and tarot ideas, while the reverse sides are all fantastically illustrated with good graphic design.

To start players choose a Curse Chaser. Each character has slightly different abilities, which are represented by three stats as well as a unique card deck. This deck is how players interact with the world, growing in power as they collect cards to add to it.

During a turn players have a number of actions, and depending on where they are on the map, these can be utilised in different ways. Random events also occur at the start of a players turn, the severity of them depending on the location. A Wanted and Most Wanted board give players the opportunity to track down and claim bounties. Those on the Most Wanted board gradually being removed until powerful boss enemies are unleashed.

Curse Chasers are adept individuals, but even out in the desert they are vulnerable. This is represented by players effectively spending character stats (Life, Bullets or Curse) in order to achieve their goals. Should a character hit zero Life, they are sent back to town. Having Bullets to spend provides bonuses in combat. While having the characters Curse exceed their threshold turns the Curse Chaser evil, sapping their vitality.

I really like The Few and Cursed, and not just because I won. The deck building element isn’t original, but it’s an intelligent use of the mechanic which provides a real sense of progression to the game. Players have the ability to curate their deck, which really invests them in what goes into the deck and how it will be used.

While the ultimate goal is to amass the most Fame, there are plenty of ways to go about this. Job cards offer objectives to complete, which may seem counter to common sense. But this can be used to a players advantage, to confound their opponents.

My first real lead on Mike when we played was when I strung together a series of moves which increased my Curse to absurd levels, momentarily hobbling my character, but snaring me a Job card. Then I pulled some crazy card combinations to shoot my Curse back down, allowing me to remain on the map and gain a better foothold. It was a string of actions which pushed my luck to the limit, but was a lot of fun to put together and execute.

What really impressed me, though, was how the Curse Chasers are treated as a resource. Players constantly increase or decrease character stats, trading off security for advancements on the Fame track. This plays into so many aspects of the game, in moving around the board, hunting bounties, even what players purchase from the store. I enjoyed that there were no surprises, at least not on the characters end, which let me work towards certain goals with some confidence.

From a gameplay perspective The Few and Cursed appears to be largely together. I think some of the layout design could still be tweaked. For instance, it is hard to tell the difference between some locations. This is important, as certain bounties are only available at certain locations.

Also icon and amount layout combinations are reused, with the location it appears on the card meaning different things. It would be good to see some more clarity in what is a card cost and what is the ability, for instance. But after fifteen minutes or so of play this didn’t become such an issue.

When I logged in to play The Few and Cursed I didn’t really know about the game, or what to expect. What I found was a quite engaging game, with some smart uses of popular mechanics, which neatly blends Western and supernatural themes. Plus, it was darn fun to play, so well worth checking out when it hits Kickstarter next month on 4 June.