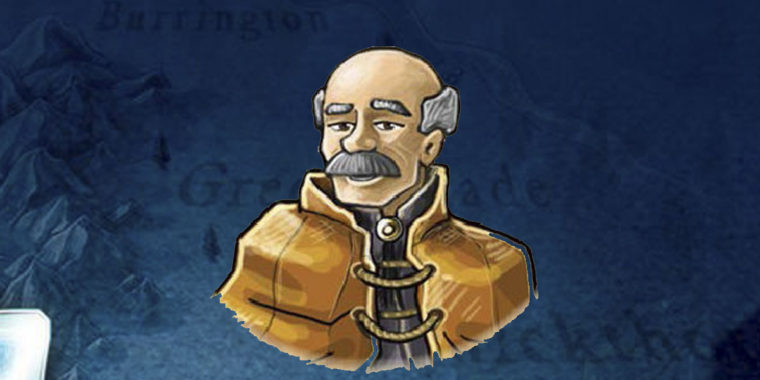 Return to Alexander Pfister’s Oh My Goods universe in a quest to reach Newdale via an eight chapter epic.

Expedition to Newdale is a 90 minute affair for 1-4 players wherein everyone is trying to create the best synchronized engine to advance the story and win the game. Though the game provides eight chapters, which introduces new cards, game boards, and other mechanics to progress the story of the titular expedition, the game’s core mechanics remain unchanged through seven of the eight chapters. Eschewing legacy games, there is nothing to destroy or discard, only additions (to be used or excluded depending on the group of gamers) to enhance the options and advance the underlying story.

At its heart, Expedition to Newdale is a simple worker placement game where players are working to generate goods for building, exploring, and end-game scoring conditions. However, being the design of Alexander Pfister, the paths to making these actions harmonize vary, causing players to crunch the odds, sacrifice goods and/or cards, and decide what is the best play over the course of seven tightly-wound rounds.

Each player begins with their own player board, a number of wooden homes, a Coal Mine card (placed in the starting area of their player board) with five starting gaming pieces on top of the card, two numbered workers, and eight cards drawn from the massive building deck. Players will choose five of these building cards to begin with, trying to synergize the goods they produce as well as determining buildings that will help them achieve the end goal of Final Scoring Overview card associated with the current chapter. Players will then receive a secret scoring objective for potential victory points at the end of the game.

Play begins with the first player turning over the first card in the event deck. The event deck is seeded according to the rule book and also dependent on which chapter is being played. The event deck can provide special cards that enter into a communal market on the table, but their main purpose is to reveal the number of guaranteed assistants to help players produce goods during the round. Each card in hand or acquired throughout the game will require a certain number of works to produce, so these assistants are vital to helping players reach necessary thresholds to produce.

Four more assistants will be drawn from random from a bag during the round as well. Assistants come in one of four colours (yellow, blue, orange, and green). However, this is just one part of producing goods from one of the cards in a player’s tableau. For players to produce goods during the course of the game, they must place a worker in one of the three action spots under that building on their player board. Each spot may produce less or more goods depending on the spot workers are placed. For example, the Coal Mine has spots to produce two goods, where one less assistant than listed on the card is needed. Its second spot will produce three goods but requires one more assistant from either of the listed colours to meet the conditions of production. Finally, the third spot can yield four goods but requires two additional assistants of the same  on top of the needed requirements to produce at this level.

As players build buildings, they can place up to seven more of these anywhere on their player boards. The action spots under each building may yield different numbers of goods and change the requirements for those yields, so players must be strategic in what they produce and the quantities, not to mention trying to build a tableau with similar colours so that they can optimize production. Goods may also be produced via chaining, which allows players to discard cards from their hands with pictured goods that match one of the buildings on which they tried to produce. Players may also take cruder goods and place them on a card that needs those goods to produce more valuable goods. When chaining occurs, players also produce an additional good to the number they chain. Chaining can occur on buildings that unsuccessfully produce when assistants are drawn.

To build, players will place one of their workers on the building action in the shared worker board. When doing this, they can then choose to place one of their wooden homes onto a map one or two spaces away from any current homes they have on the map (all players have one home on the board at the start of each game). Choosing to build in an adjacent city may give players the opportunity to claim a bonus tile from the board that was randomly seeded during set up. These bonus tiles allow players to trade in building cards for goods, earn bonuses if a number of the same colour of assistants are drawn during the round, or even to subtract the cost of an assistant from any production.

Building two spaces away does not allow players to claim a bonus tile (unless they perform an action using a worker on the shared board that allows them to move two spaces to build and claim a tile). Other buildings provide non-production benefits as well, such as fortresses that give players military strength (based on the number of fists on the card), post offices (which provide permanent boosts to the number of assistant of a specific colour), and other production buildings that only trigger goods production at the end of the round without workers needed.

There are shared board actions, which not only aids people to increase the distance in which they can build on the game board, but includes other options for varying gameplay. These actions include freeing additional workers. This comes at a cost of resources (discarding the equivalent of 7 for the first worker, 13 for the second). These workers can prove valuable in future rounds, allowing players to carry out more actions. Players may also place a worker on the shared board to discard cards from their hands to draw new cards, or to gain black market goods that are placed on the coal mine and one other building of choice. 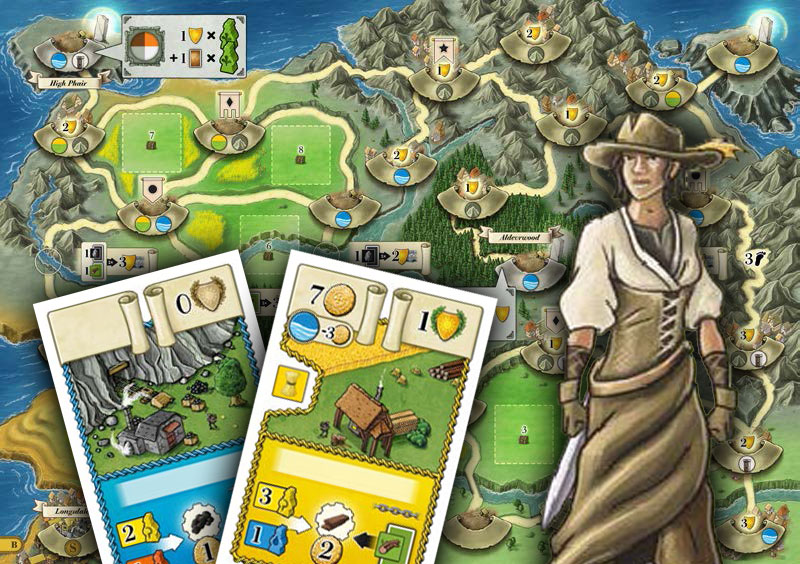 The game unfolds over 7 rounds as players try to build a symbiotic engine, place workers and chain their actions by the number on the worker pawns (so Worker 1 will go first, then Worker 2, and so on), and try to maximize chaining goods and building where they can. All of this is in service to meeting the scoring goals of the game. If players choose to play the campaign, these scoring conditions will change and may include gaining specific resources and meeting a military strength threshold. In solo games, the goals are far more specific and provide a deeper challenge.

And make no mistake, Expedition to Newdale is challenging but not due to the myriad actions players take across its seven rounds. All it takes is one round for players of any skill level to acclimate to the actions and what is and could be available to them. However, an overflowing deck of building cards can make getting the right buildings to meet the scoring conditions a game of luck rather than skill. As the campaign advances and more cards are shuffled into the deck, the probability of getting the buildings you need to produce the necessary goods shrinks. It’s one of the biggest weaknesses of Expedition to Newdale, where a lot of options actually hinders progress. It’s even more crushing in the solo variant, where by round three a player will know whether they have any chance of pulling off a win.

More seasoned players of Pfister games will also begin to settle into a routine in their first few turns just out of habit. Again, by creating a varied engine of actions, in the end Expedition to Newdale boils down just a few rudimentary actions at the beginning of each game so players can optimize their engines even before they get them going. That the game only goes seven rounds means every action is valuable, so experimentation with the available variability goes away in the chase to meet end game requirements.

However, Expedition to Newdale — even with these limitations and circumstances — is a lot of fun. Once all players are familiar with the game and the parameters of a specific chapter, the game moves quickly but still provides excitement and intrigue. Waiting for the right building card(s) to come up can be excruciating but also fun. Building an engine where you can maximize chaining production is a delight, allowing a lot of flexibility. Finding the sweet spot of what you have built and how to leverage it in seven short rounds is the best part. You get the chance to run your engine every round and to improve it, but the game’s swiftness means it’ll never get overwhelming.

Pfister is a master at presenting players with a lot of options but ultimately having them seize on just a few of them. Expedition to Newdale is no different, and though it isn’t the strongest game in his expanding oeuvre, it may be one of the most accessible for gamers interested in Euro games but afraid of hours-long games. It’s more than a toe in the deep end, but players won’t find themselves completely underwater or out of the game at the end of the first round.

Expedition to Newdale was designed by Alexander Pfister and published by Lookout Games. It is available now.