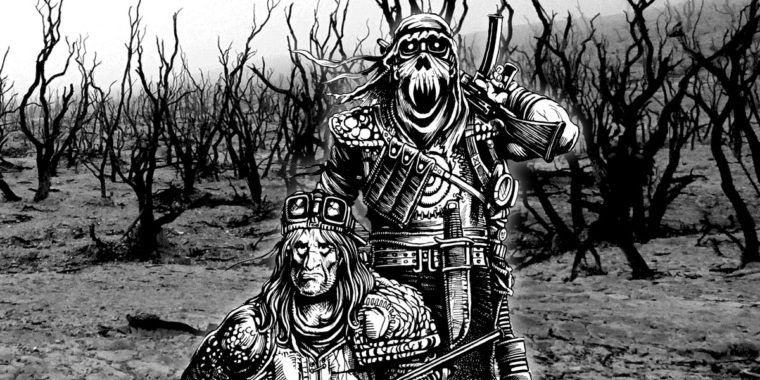 A land blasted by nuclear war and titanic robots. The scattered remnants of mankind eking out a life amongst the rubble. Savage bandits staking the edges of communities. And you, a scout, alone and being hunted.  Welcome to the wasteland. Welcome to your story.

Wretched Wasteland is a narrative building roleplay game for one player. Set in an apocalyptic future, the player takes the role of a scout from a compound. It is up to you to make it back to the compound with information on a large raiding party headed for your home. But time and the wastes are against you.

To see you on your journey are four basic gameplay elements; a deck of Poker cards, a block tower, a D6 and the Log . The Poker cards correspond to events, using each cards suit and number to identify them. They provide opportunities to move, Kings mark your ever approaching death, and occasionally beneficial items can be found.

The D6 serves two purposes. It is initially used to generate how many cards the player draws for that turn. After this it is rolled to see if the player moves to a new location. While the block tower represents the players mental and physical state, which is gradually chipped away during events. 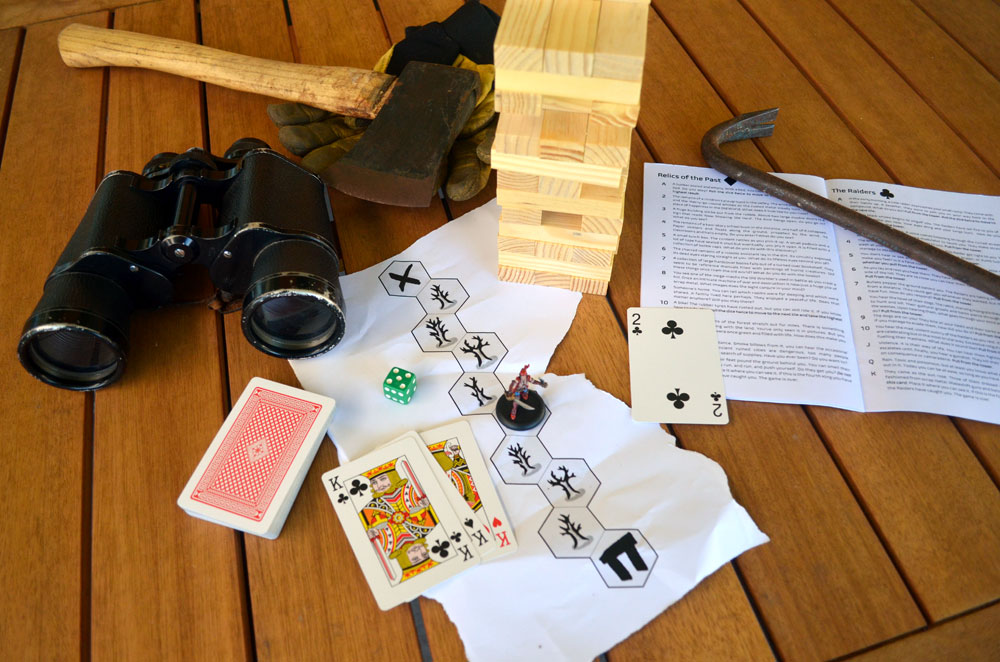 Lastly the Log is a record of the player’s adventures and close calls.  To create this you can record yourself using any video or audio device. Lacking, or not being comfortable, with that writing it all down akin to a journal will suffice.

At this point let me provide some information for transparency sake. This game is designed by Stuart Watkinson, who writes for The Campaigner. He hasn’t created it completely from scratch though. The creative commons title The Wretched, by Chris Bissette and Loot The Room, has provided a framework for him to build upon.

I’m not familiar with The Wretched, so I don’t really know where Stuart’s contributions start and Chris Bissette’s end.  So I’ll just talk about the game as an immutable whole. Whatever the makeup, I don’t plan to pull any punches.

Wretched Wasteland does something I really like. It takes elements of other games and repurposes them for a wholly new experience. Poker cards see a lot of use in other games, so it is the block tower which really stands out. Not only does it look impressive, it neatly conveys the gradual breakdown of your characters mind and body. 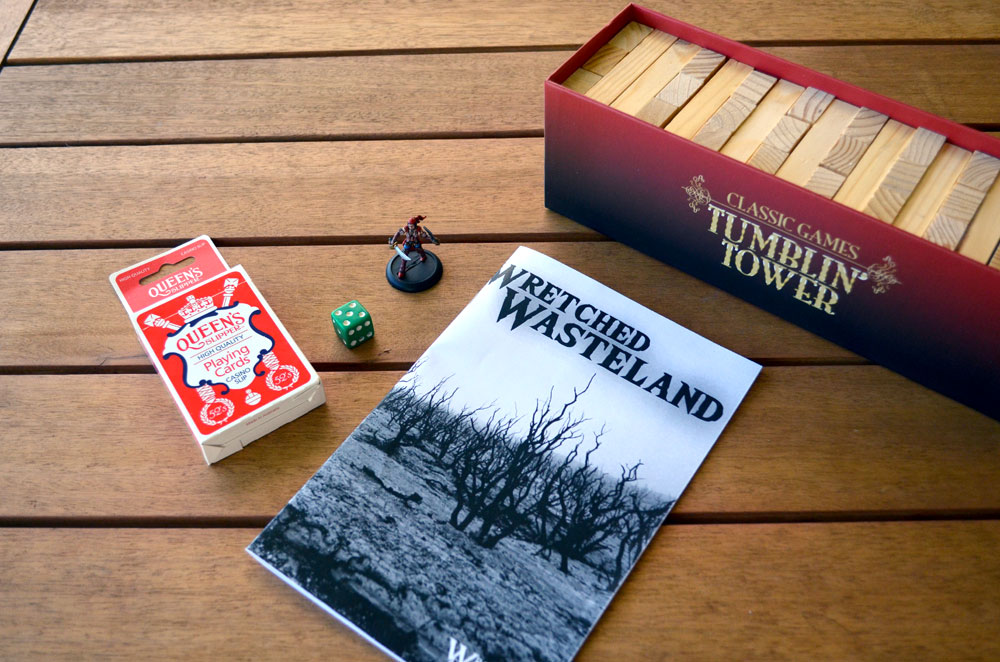 Aligning each Poker suits with a basic theme (Clubs for instance represent events based around the Raiders) provides a nice visual cue when revealing cards. Even before you have worked out what they do. Players put the revealed cards into any order they want, giving them a lot of control over the story being built.

This fits neatly into the Log concept. Being tasked with recounting the day, the player can string together events to create a mini-epic of their own. Maybe there is something they keep seeing, or a person they keep stumbling across. Or perhaps they are truly alone, and a litany of misadventures follows them before their eventual death.

Perplexingly the parts of this game I really like are also the part the can be the most disappointing. While the block tower is thematic and inspired, it has woefully few mechanics attached to it. So much so that, going by-the-letter of the rules, a person could just take the topmost blocks off when prompted. Obviously this is against the spirit of the game, but there seems like a prime opportunity to add some risk reward decision making into the game has been missed.

The narrative event cards contain a lot of story prompts, but largely they are bare of anything that effects the game itself. It seems like players should constantly be making life or death decisions. But mostly it’s just them recounting things they did or saw. 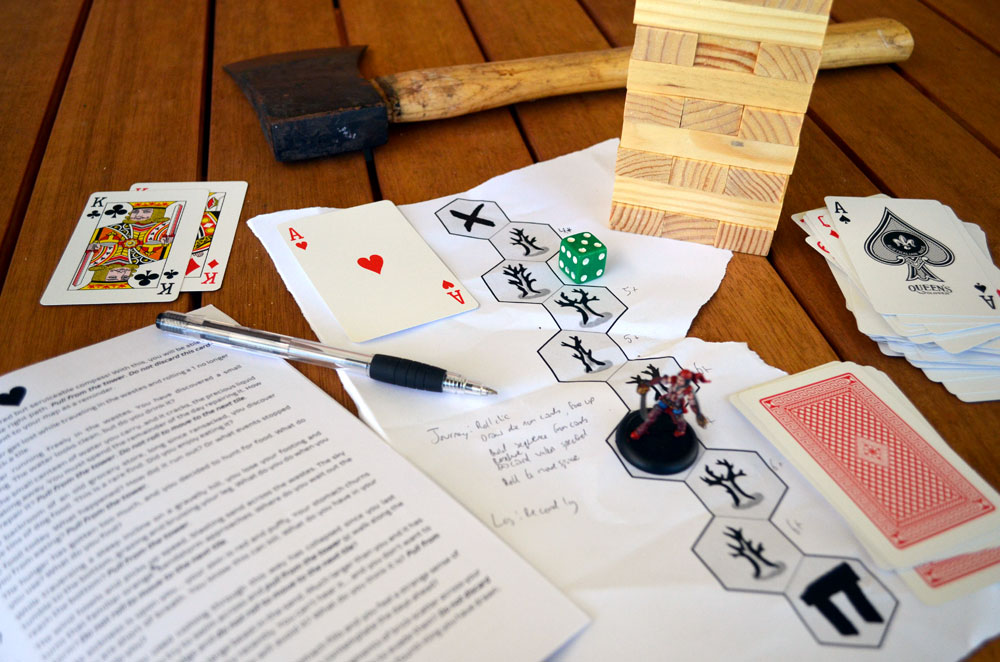 This all feeds into the Log itself. While a fantastically thematic and unique element of the game, it has no bearing on, well, anything. You could comfortably play the game without the log element and still achieve the same gameplay experience.

But I think this all points to what kind of thing Wretched Wasteland really is. It’s a narrative facilitator, as much as it is a hard-and-fast game. The player isn’t meant to learn and master the rules to find the optimal path to the end. Rather they are supposed to feel and reflect on the situations and people it presents. This is YOU being hunted over these cracked landscapes. What would YOU do?

Which makes Wretched Wasteland a quite serene experience, all things considered. So many of the trials and tribulations put before the player are happening purely through chance. There are occasions where decisions can be made, but largely, you just go with the flow. And when it’s your time it’s your time. You can always try again.

Wretched Wasteland is by no means a flawless game. But it does offer some quite unique elements, and gives people the chance to build their own daring narrative adventure story with very little prompting. It’s also quite cheap to buy, and uses a handful of pieces quite commonly available. Which makes forging your own legacy in the wasteland quite an attractive prospect.

Wretched Wasteland is designed and published by Stuart Watkinson. It is available now as a digital download through itch.io.