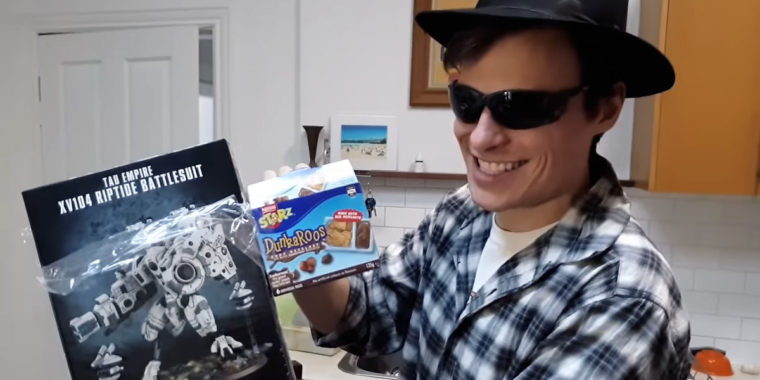 Last week a small section of the internet went crazy for a mistreated Tau Riptide. Part of an episode of FriendlyJordies, the partially melted model was put on eBay as a charity auction. At this point well over AUD$5000 the item has proven to be hugely popular.

I talked to host of FriendlyJordies, comedian Jordan Shanks (JS), to try to learn why this model exists and the reason he has chosen the charity he has. Be prepared for NSFW potty mouth, flippant remarks, and a person with a deep need to address the problems of the world in a responsible way.

ML: To give everyone a little context, what is the main focus of the channel/show FriendlyJordies?

JS: Oh, political and social satire. That and you know… a shit ton of clickbait.

ML: At the moment you are running a charity auction for a “melted shame” Tau Riptide. Where did this model come from, and why are you auctioning it off?

I’m auctioning it off and giving the proceeds to the Australian Conservation Foundation. Australia is facing an extinction crisis. The Liberals would rather take kickbacks from mega farms than protect some of the most unique species on earth.

I’m auctioning it off to draw attention to the fact that because the Liberal/Nationals are actively going out of their way to destroy these ecosystems, you have to step up. You have to donate to green groups so they have the resources to fight legal battles. Also to remember this money is tax deductible, so either that money goes towards destroying the environment or it goes to protecting it. Your choice.

ML: What led you to buy, and attempt to paint, this model? And how does this make its way into a show that is primarily concerned with political satire?

JS: I have as little a clue as everyone else! The only answer I can think of is…. God exists? It just sort of became a joke with my audience and then, boom. Inside joke that cost me 400 FUCKING DOLLARS!

ML: Do you have past experience in wargames, or tabletop games, in general?

JS: Nope. I used to collect Warhammer as a kid, thinking “one day I’m going to have a sweet 2000 point Orc army”. Forgetting I was 12 and these things cost, I dunno, $100,000 per goblin? So I’ve never actually played a game, BUT now I’m very excited to play one and verrrrrrrrrrryyyyyyy unexcited to learn the rules. WS? BS? S? What the fuck does that mean?

ML: Currently the bid is around AUD$4,640. Are you surprised by the support people have thrown behind this? Did you think that your piece would be attracting such a high price?

JS: No! Let’s be VERY clear about this. You are purchasing garbage. 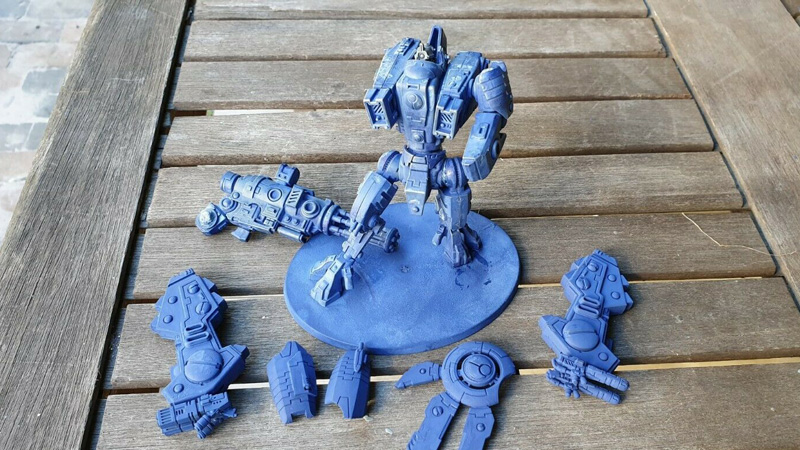 ML: Why did you choose the Australian Conservation Foundation as the charity? What about this organisation do you think is important to support?

JS: Well if you look at the history of it, every major breakthrough in environmental protection within Australia – ACF was there. They’re one of the only nationally focused environmental protection organisations that are large enough, connected enough and resourced enough to make major break throughs. They’re tactical and pragmatic and as such they get results – LIKE THE TAU!

ML: When the auction is finished is there something you would like, or even dislike, to see happen with the model?

JS: I would love if someone was able to make it look half decent because CLEARLY I’m not the man to do it. But it would be cool to see it transformed like that old Channel 7 show Ground Force, but astoundingly with a WAY bigger budget? How does that work!!!??!

ML: Will you continue to include tabletop game related content? Or do you think this idea has run its course, at least for now?

JS: Maaaaan if you went to my most recent round of  stand up shows where I’m trying to teach people why the country is the way it is due to the reforms of the Howard era, and all I get for the entire hour is “WHEN ARE YOU GOING TO PAINT THE BATTLE SUIT” you’d know the idea hasn’t run its course yet.

There is still two days left on the Riptide charity auction. The current bid is over AUD$5000. You can find FriendlyJordies on YouTube  and donate to the Australian Conservation Foundation online.