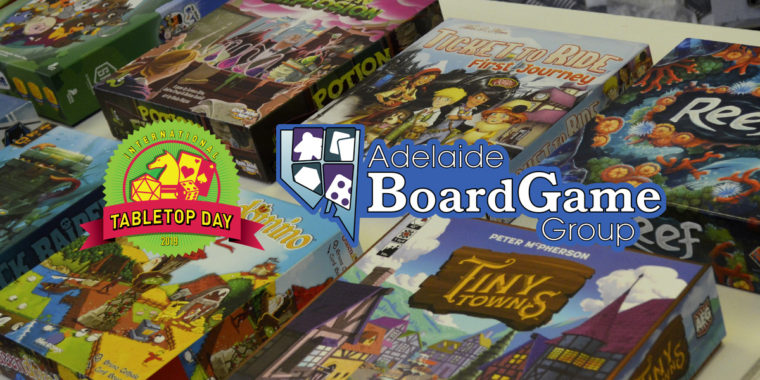 Tabletop Day excites players everywhere. We don’t normally need much of an excuse to get together and game, but Tabletop Day gives us a chance to share it with the wider community. So for this year I was excited to head down to the Hackham West Community Centre for Adelaide Board Game Groups inaugural event at the location.

If you are familiar with Adelaide’s southern suburbs, Hackham probably isn’t in the list of the top twenty places you’d expect to see a tabletop event. But the members of Adelaide Board Game Group (ABGG) which organised the event knew the area well, and that an event like Tabletop Day would be well received.

They were right. Locals both new to tabletop games and community stalwarts attended the event. Everyone participated in a friendly and fun atmosphere, meeting new people while playing games familiar and new.

Most interestingly there were a number of families with children of various ages in attendance. One parent commented that they thought they would come for around an hour before the kids got bored. They ended up spending almost six hours at Tabletop Day, playing games like Rhino Hero and Robot Turtles!

I’m impressed with ABGG for taking the chance on an out of the way event location like this. It was great to see the local gamers, young and old, experiencing a format of community play that often many of us take for granted.

Hopefully this helps to spawn a regular tabletop event within this community. As there is certainly an audience for it. With the potential to grow both locally as well as bring access to tabletop gaming to nearby suburbs.

You can find a selection of photos taken at the event on The Campaigner’s Facebook page.