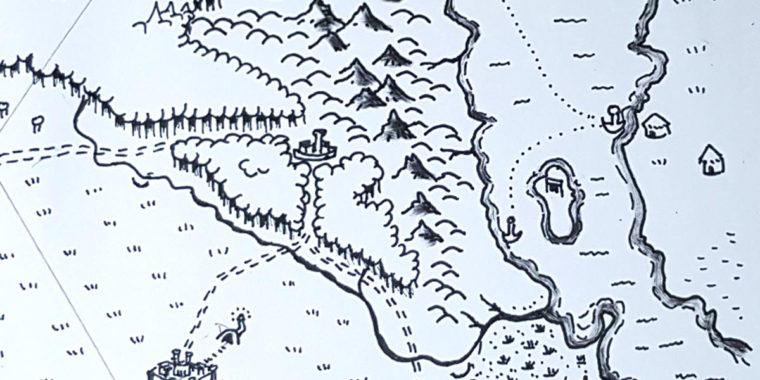 January on Kickstarter ushered in Make 100 for another year. This is where creators are encouraged to run a campaign with an element of it limited to 100 items. Bannister Nicholas (BN) is a roleplay game designer and player who is taking advantage of the event by offering to create a very particular map. I talked to Bannister about what the aim of the project is.

ML: What is the Make 100 Fantasy Locations about? What are you offering backers?

BN: I’m offering backers a chance to get a little creativity out there into the world. Lots of people have great little ideas, but don’t have a platform to share. Or they think the world-building process will take too long, and too much work, so getting a ‘little’ bit done by a hundred people breaks the work into far smaller chunks, small enough for each person to deal with.

ML: What kind of experience do you have in creating maps? Or in content roleplay games in general?

BN: I’ve created a few maps professionally for authors and Game Masters. They usually have an idea or a plot or some thoughts. I flesh it out, add physics, logical paths of ecology and economy to put together all the nitty gritty that many people forget to include. I’ve been Game Mastering for more than 30 years, 25 of which as a professionally paid GM, so the content levels for a professional game is usually a lot higher than casual gaming with friends. Most of my roleplay content involves coloured cards for maps, locations, locations within locations, such as buildings within a town, streets etc, then within those are non-player characters, whom can interact with the players, they in turn have statistics and skills in case the game requires that NPC to have more than verbal interaction. I have well over 10 thousand of these cards in boxes, and am porting them over to a computer database, and I thought.. well surely hundreds of other Game Masters do something like this. Maybe if they could put their places, their locations, together into one world, wouldn’t that be something? But that’s an enormous project… so instead lets tackle this elephant with the first bite, maps, and see where it goes from there.

BN: I needed some vehicle, some idea or concept that would be small enough to do so I could cut my teeth on Kickstarter. There are hundreds of small nuances of any project and its usually only by doing can we learn. Even the Kickstarter website and all its bells and whistles only unlock after you press the “Launch” button. When Make 100 came up, it was an instant light bulb. I only needed to do 100 items, so even if it went viral like the potato salad project, I’d be limited to still only making 100 items.

ML: In what way do you think a map like this is a helpful tool to roleplayers, particularly for Game Masters or others trying to create a world?

BN: Game Mastering is about three concepts; knowing the rules well enough to not always need to reference them, knowing the lore (i.e. monster stats, weapon stats, etc) in case you need to quickly add it on (or at least know what page its listed on so you can look it up), and knowing the world so you have coherent flow for the players. The first is easy enough and can take a few weeks, the second is harder, and takes months or years depending on the system and your access to the lore, but the world, especially if you’re making up your own, can be too much for a casual GM. Its easier to grab a map, and just run with it.

There are a myriad of tools being developed, Kickstarted and produced to help new GMs randomly create stuff. Its gung-ho, often doesn’t work, but it gives them ideas on what to do (and not do). This map may be nothing more than inspiration, each location can be ‘pulled out’ and put into someone else’s world. Its less gung-ho, I’ll tweak the positioning to get it all fitting into one coherent map, and hopefully people will see that and say, “ahh, this makes sense”, and use the map or the ideas properly for their own worlds.

ML: What existing map designs or approaches inspire you? How do these influence your work?

BN: When I traveled Europe, I saw these tourist maps, they showed the standard land, town, road path parts like every map, but they also showed a little icon, usually hand drawn, simplistic, of what the building looked like. I have maybe 30 of these in my travel pack. Most of them were castles or major landmarks, and It just looked neat. I thought, if a fantasy world of adventurers existed, and they were common enough, going around saving people, solving puzzles, completing quests, then surely a market would crop up, selling potions, +1 swords and maps. And the maps would likely show all the ‘key quest locations’.

ML: Getting the physical map seems like something a lot of people would be interested in. There is a tier for that, which is $500. Could you explain the reasons for the cost?

BN: The map takes time, 100 main locations, including terrain, nearby towns, villages, etc, means the map will be around 1m x 1m in size. It’d take around two weeks to draw if I did it start to finish, 12 hours a day. When I’ve done maps of that size in the past, I did research into land mass, tectonic plates, rainfall, bio-zones for plant life, so there is a lot of background work to be done. Once I have completed it, if someone was to ask me to do another, I need it to be understood what the average price for such a product is going to be. So I talked to several artists, found out what they charge for work of this size and $500 is pretty cheap.

ML: What will this Kickstarter hopefully lead to, or teach you?

BN: Firstly, it will teach me how Kickstarter works. Doing a major project takes time, effort and requires a lot of understanding. I’ve consulted with people who have started projects and failed and the number one concern was information overload. You build this project, you have others give you feedback and you’re always under prepared. As I write this, I’ve hit 26% funding, and I already have a whole slew of dashboard information, buttons that didn’t exist, and feedback loops to check on. Vital information. If I were running a full scale project, I’d have too many new things to worry about, on top of running the Kickstarter. Secondly, I’ll build my community. I’ve been doing it on the side for years, but this focuses it all, as they say, put your money where your mouth is. Lots of people said they’d buy my roleplay book when it comes out, but statistically, only 20% of people follow through