The team at Red Genie Games, who created the sensational game The Brigade, are set to return to our tabletops with Tinderbox Tales. Co-owners of Red Genie Games, Ben Hoban (BH) and Alex Wynnter (AW), decided to take some time out from world building and provide some insight into the new project.

ML: Can you tell us what Tinderbox Tales is? Is it one game in three parts, or is it three separate games? What are the games about?

BH: Sure! Tinderbox Tales is three small box games, all totally separate in game style but linked in theme, in that they are all set in the fantasy town of Tinderbox. The games are all accompanied by novellas which detail events surrounding the gameplay. We took some inspiration from The Canterbury Tales in the naming of the games which are:

The Barmaids Tale: a 4-6 player Social strategy game with a fun storytelling element. Players take on the role of a party of adventurers passing the blame for the failure of a quest while trying to amass the most coins.

The Damsels Tale: a 2-player asymmetrical strategy game with elements of hand management in which a knight is trying to raid the dragon’s horde, while the baby dragon tries to alert his mother to the knights presence.

The Traders Tale: a 2-4 Player trading game with worker placement where a bunch of wizards are racing to gather enough resources to hire the adventurers they need for a quest by buying and selling goods around town.

ML: The games are set in The Vague World. What is this place, and what connection does it have to The Brigade?

BH: The Vague World is the setting that we have created for our range of fantasy board games. It’s very Discworld and we make no apologies, you really can’t do satirical comedic fantasy without being compared to Pratchett, and as fans we are happy to own the comparison.

At the moment the main place of significance is the town of Tinderbox which was the setting for our first game The Brigade, and which we have returned to for Tinderbox Tales.

Somewhere in the development of The Brigade we were blessed to attract the writing talents of Ivan Nevill and Ben Harnwell. They have been instrumental in us making the decision to create The Vague World with their amazing work for The Brigade. Their hilarious take on the events leading up to the gameplay, the background of the locations and stories featuring characters in the game captured the backers imagination and brought the world to life. 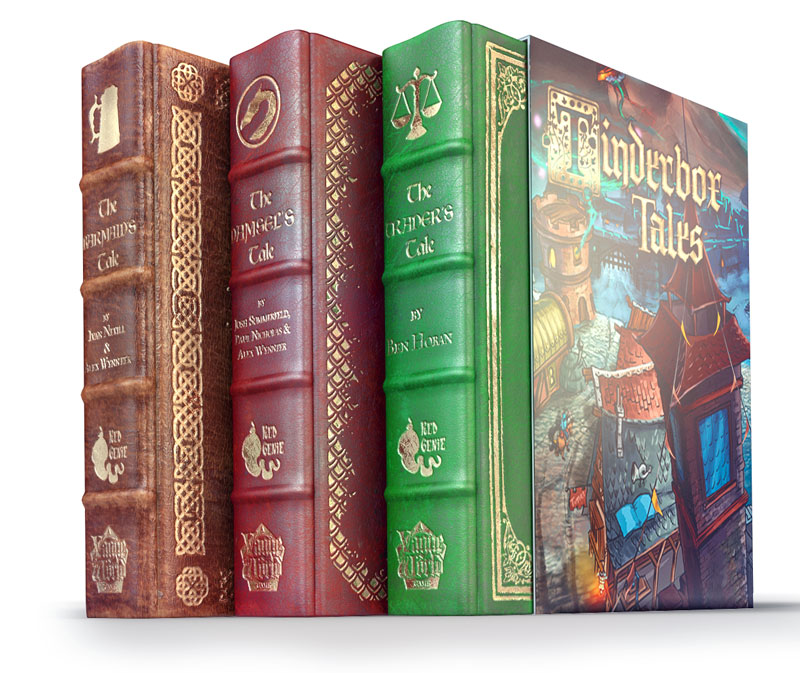 ML: Do the games in Tinderbox Tales tie in together? Are they meant to compliment or support each other in some way?

BH: The games are tied together by a narrative, as you read through the novellas and the supporting issues of “The Tinderbox Times” (the town’s greatest, and only, newspaper) you will get to know the characters and history of Tinderbox and understand the significance of the events that the games depict. All the stories and games make sense and are enjoyable independent of the story and theme, but for players that are looking for something more from their board game setting, unravelling the history and politics of Tinderbox will be a rewarding experience.

ML: Who are they designed by? Is it the original team from The Brigade, or have you brought other designers onboard?

AW: These three games in Tinderbox Tales have been designed by the Red Genie Game team & Co. We have enlisted, or had involved as co-designers, the very talented Ivan Neville, Tristan Bell, Josh Sommerfield and Paul Nicholas.

One of the three games is actually about four years old, and is finally seeing the light of day. Which I am super happy about.

ML: When do you plan to bring Tinderbox Tales to Kickstarter?

BH: The date has been put back a couple of times already as we wait for the fulfillment of The Brigade to be completed, but all going well we will be live on the 9th Oct.

ML: Is this a one-off addition to what you began with The Brigade? Or do you plan on introducing more games to the Vague World series?

AW: The plan is to fill The Vague World with lots of stories from all sorts of games. As more games develop so will the world, from adding in new places on the map, more things to do in town, down to the personalities inhabiting it.

We have an awesome and creative team of writers, who keep coming up with ways to expand the lore. So much so that we may have to create a wiki to keep track of it!

But we have started taking game submissions from designers, and a selection have started to be developed. So look out for other The Vague World titles from a variety of designers in the future.

You can find out more about Tinderbox Tales on the Red Genie Games website or Facebook page.