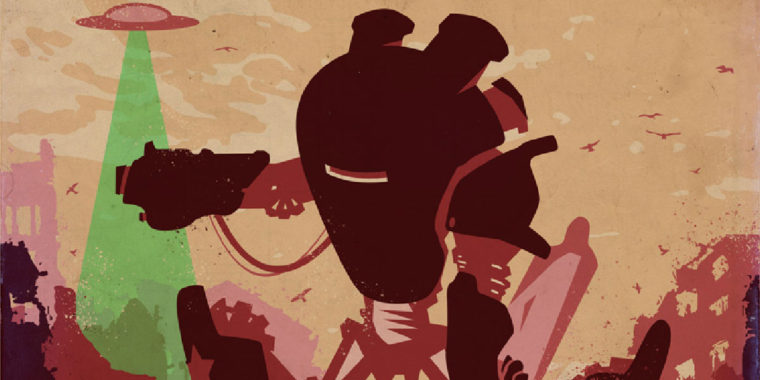 Some may have been surprised last week when Fragged Dieselpunk Mecha suddenly landed on Kickstarter. Doubly so when they discovered that the campaign was only nine days long, and had a funding goal of a single Australian dollar.

I managed to intercept Wade Dyer (WD), creator of Fragged Dieselpunk Mecha, during his frenzied assault on the crowdfunding platform and put some questions to him about this mad campaign.

ML: Can you explain what Dieselpunk Mecha is?

WD: It is a tabletop RPG set in an alternate 1940s world during a large continental war. It has a strong dieselpunk theme (much like steampunk, but with a darker World War 2 vibe and a splash of the 1950s), giant mechanical robots, and a dose of crazy conspiracies (e.g. aliens).

The setting has two strong aesthetic themes, centred around the rural areas and the cities.

While the urban areas are dense and technologically advanced (hover trains, robots, etc.), and embraces the wide array of possibilities that are contained within the dieselpunk genre. 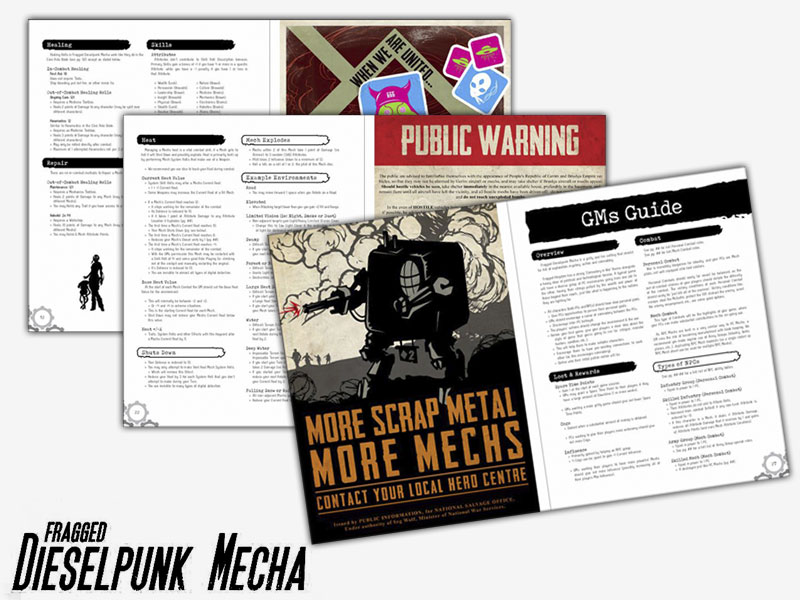 ML: The Kickstarter for this is only a week long, with the funding goal being AUD$1. Why such a limited time and goal amount?

WD: As most people within the RPG sphere know, I’ve built my brand around big fancy projects (fat RPG books with LOTS of big expensive art, loads of rules, loads of lore, miniatures, dice, etc.). But this time I’m trying something new; I’m looking to create an entire product from start to finish within five weeks. So I am keeping everything really tight; no physical product – just a PDF, writing and illustrating most of the book myself, and primarily target my existing audience (campaigns don’t need to be long if you’re not primarily looking to reach out to new people, in my opinion).

ML: Is this a standalone product? Or will players need other books to utilise this?

WD: This is not a standalone product, people will need my Core Rule Book. But I have a single pledge level that will give them a PDF of the Core Rule Book and this new book.

ML: How does Dieselpunk Mecha, and the Kickstarter for it, differ from your other Fragged titles?

WD: Its core structure is just like my other expanded book; they are simple a rule and setting adaption for my Core Rule Book. But it primarily differs in my production and development methods.

ML: Depending on how successful this is how will it affect what you do in the future?

WD: I do this again… maybe. I think the stars will have to align just right, where I find myself very motivated and excited by a product idea that I don’t think would give me a good return on investment by being a physical book.

ML: Is the Dieselpunk Mecha setting a one off creation, or will you make additions to it at some point?

WD: It will most likely be just a one off creation, unless it becomes very popular.

Fragged Dieselpunk Mecha is on Kickstarter right now. There is, quite literally, only a couple of days left to go. So check it out now and pledge, or you will definitely miss out. You can also find Wade’s other games on the Fragged Empire website.