So, ya wanna attack and dethrone a god? Again? Here’s your chance!

In 5th Edition Dungeons & Dragons, a level 20 character is a force to be reckoned with: skilled, powerful, and loaded with abilities. Then there’s a whole party of them. Challenging a party of high-level adventurers can be tough for the most experienced Dungeon Masters. Quite often it boils down to increasing armour class, hit points, or throwing more monsters at them in an attempt to make a dent in the heroes. Or the tarrasque… But we don’t just want some huge damage sponge that reflects magic (or do we?).

We want this; Mythic Encounters! Gorge on 36 monsters of CR21+ all upgraded with Mythic Proportions, 16 new spells, 67 new items, a brand new heroic background foretelling your future conquests (huge inhale), Mythic Boons to power up your characters, and a slew of fantastic art! This supplement has been designed with the hero’s journey in mind. The idea that the character will go through hell, fight the monsters inside and out, and come through the other side having grown and changed. 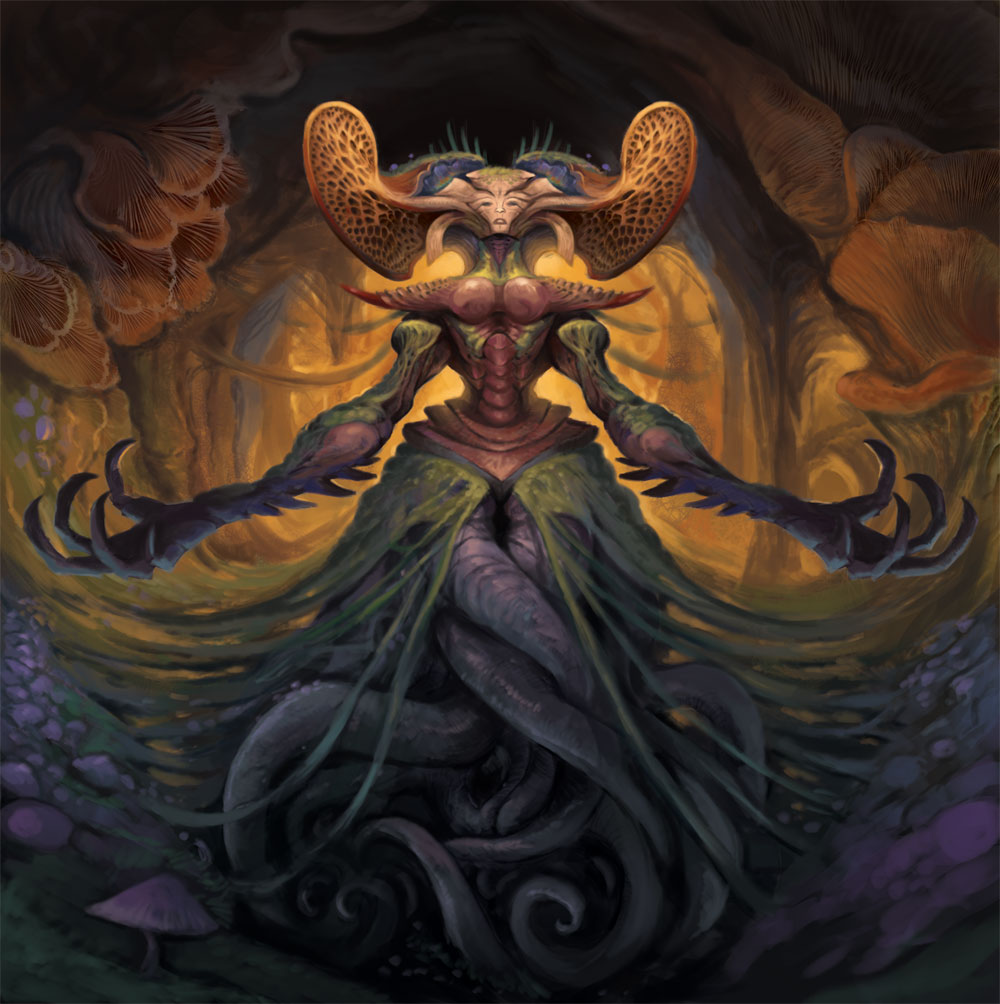 The Mythic Ascendant background creates a prophesied hero that moves out into the world in search of the threat they have been called to combat. A prophetic event sparks your journey into heroism and adventuring, and there is a random table to roll on to help get the creativity going. Each one gives a very different flavour and may help align your character with your ultimate foe.

And ultimate foes are in abundance. This book has 37 brilliant monsters that come with new abilities, lair actions, and are upgraded to mythic proportions, meaning that they have Mythic Encounter options and Mythic Actions. These are optional additions to the combat encounter that create increased challenge and danger. A Mythic Encounter is triggered when the monster’s hit points are reduced to zero. The party, thinking they saved the day, are faced with another even more deadly encounter.

Let’s take Juiblex for example: ‘Juiblex is a maddening pile of oozing gelatin and is amorphous but always at least 9 feet tall or long. The fluids that comprise the form of Juiblex shimmer between a variety of shades of black, green, brown and blue, but all dark colors that blend into one ugly mess.’ It is, essentially, the demon god of ooze. When Juiblex reaches zero hit points a mass of tentacles burst from the bubbling pile of ooze, attempting to consume everything in their path to regain strength and size. The tentacles fill the room and the party must destroy each tentacle before it absorbs everything it touches! Juiblex then has access to Mythic Actions which allow it to use the tentacles to slam into the ground, causing difficult terrain, or slap adventurers and draw them into itself.

However, these exceedingly challenging encounters come with their rewards… as each monster has spells and items that become available once the devastating combat is complete. When the heroes stand above the slain corpse of Juiblex they have access to the Staff of Slime and Many Eyes granting the wielder many of the powers that Juiblex had! There are 67 new items in this book and all of them are unique and interesting… and horrifying. Like The Stomach of Donjon. Which is literally a beholder’s stomach that transports anything that goes inside into a demiplane… Who even wants a bag of holding now?

The last thing that must be mentioned is the artwork. The designers of Mythic Encounters, Steve Fidler and Bryan Holmes, have curated a huge range of artwork from a huge range of artists. Several pieces have been commissioned and others have been used with permission. What comes from this extensive range is a beautiful looking book filled with fantastic inspiring art that will lead you directly to the artists that created them.

If you want to run engaging, dangerous, and challenging combat for high-level parties. This is the product for you. You can pick up a copy on the Dungeon Masters Guild right now, just click here!

You can check out other works by Steve Fidler, Bryan Holmes, E.R.F. Jordan on the Dungeon Masters Guild.