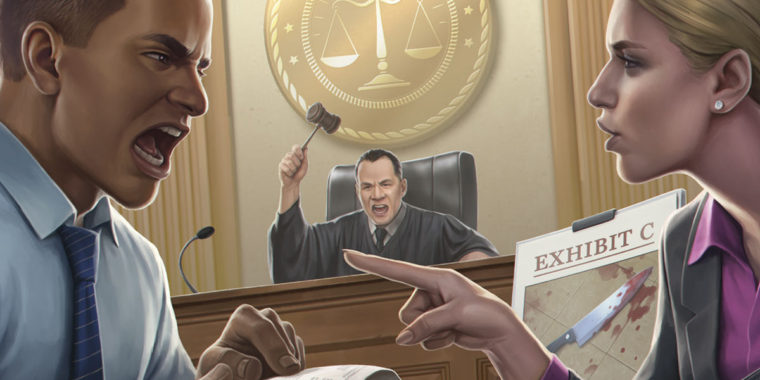 Lawyer Up is a two-player asymmetrical card game in which each player poses as the prosecution and defence in a mock battle of swaying the jury and winning the case.

The premise of Lawyer Up is quite simple. Players begin by choosing one of the two cases available in the base game (one is an art theft and the other a murder). Players will choose their respective deck of 26 cards (one for the prosecution and one of the defence) which provide base arguments and procedures. Next, players will engage in the Pre-Trail by conducting a shared draft from the case-specific deck. While drafting cards, each player will choose three cards from the shared deck, choosing one to add to their own starting deck, one to add to their opponent’s deck, and one that is considered buried evidence which will not appear during the course of the game.

Set up continues by displaying the 12 juror cards and randomly assigning them one of the bias tokens. These symbols will match bias symbols on the cards in each player’s deck and are important to building cases, winning witnesses, and eventually swaying jurors. Witnesses are set out in a pool where each player can see who is available during the case. These witnesses are who each player will be trying to win in each round of the game. Finally, each player will receive three objection tokens that allow them once per round to stop their opponents from playing a card during the Trial phase. Players draw five cards from their constructed decks and the first player is determined and flips over their judge’s favour token. The first player chooses the first witness to call and the Trial phase begins.

Players will take turns playing cards from their hands trying to gain more influence for a specific witness. These witnesses are important on multiple levels. Beyond the variety of cards each player has in their hands (evidence, procedures, and arguments) that offer influence, witnesses may provide further influence boosts as well as variable powers that can help players during the course of the game. Witnesses will also be valuable at the end of the game when players have one last chance to tally influence and sway jurors.

The jurors are where the game is won or lost. The prosecution’s goal is to sway all 12 jurors to their side. At the beginning of the game, half the jurors will slightly lean to the prosecution and the other half to the defence. In both cases, so long as the defence can prevent even one juror from going to the prosecution, they will win the game. However, much of the influence on the cards (P for prosecution, D for defence, and N for neutral which helps whatever player plays it) will be weighted toward the prosecution.

In accumulating influence while calling a witness, each player must match at least one of the bias symbols that faces their direction when the witness is called. Players can play no more than the five cards in their hand at any time. Some cards, specifically procedures, won’t be played to try and win influence to capture a witness but rather in a separate area to use as a variable power later in the game. The variety of cards at one’s disposal offer a lot of options that may mean sacrificing the current witness and some influence on jurors in one round to win witnesses in later rounds.

Once players have decided to stop playing cards from their hand or run out of cards to play, influence is tallied and the player with the most influence claims the witness card and sets it aside. The difference between the totals (for example, if the defence earns 8 points of influence and the prosecution earns 5 points, the difference would be three) is found and the winning player will locate the jurors with matching bias symbol tokens to the one(s) they have been chaining during the round and will move their bias token to show they have gained influence with those jurors. The losing player now receives the judge’s favour, chooses the next witness, and play continues. The game ends once all witnesses have been called, with players adding up the influence they’ve gained by winning witnesses, finding the difference between the winning and losing player (similar to ending a round) and adjusting jurors one last time. If the prosecution has won over all 12 jurors, they win. If the defence has even one juror on their side, they win the game. 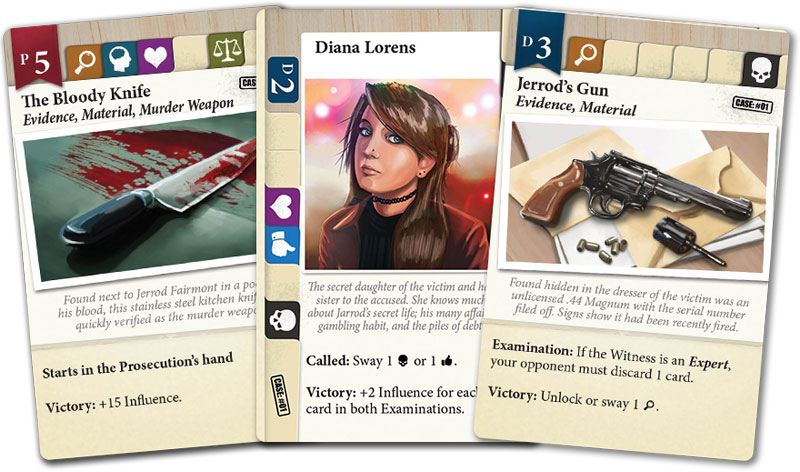 As a small box tug-of-war game, Lawyer Up offers a lot of replayability in its initial two cases based on the bias and influence system it employs. Likewise, the theming and use of jurors ratchets up the tension as players navigate witnesses, deciding when best to play particular cards and knowing when to purposely lose so that they can chain together better plays in future rounds.

The variety in case themes is also wonderful. There are case-specific cards, witnesses, and powers. Again, this offers instant replayability beyond players switching between the roles of defender and prosecutor.

However, the game has a learning curve even for seasoned card drafters and deck builders. Understanding which variable powers work well together, and being patient to wait for chains to show themselves, takes time. The cards themselves are sleek, but with so much symbology, flavor text, and card effect explanations of them, it will take time for players to decipher what to pay attention to and when to pay attention to it. Yet for fans of tug-of-war stalwart Twilight Struggle and last year’s Watergate, Lawyer Up will scratch an itch while also providing a lot of variety and strategy from its base game.

Lawyer Up comes to Kickstarter via Rock Manor Games on March 17th. This preview is based on a prototype sent to the reviewer.