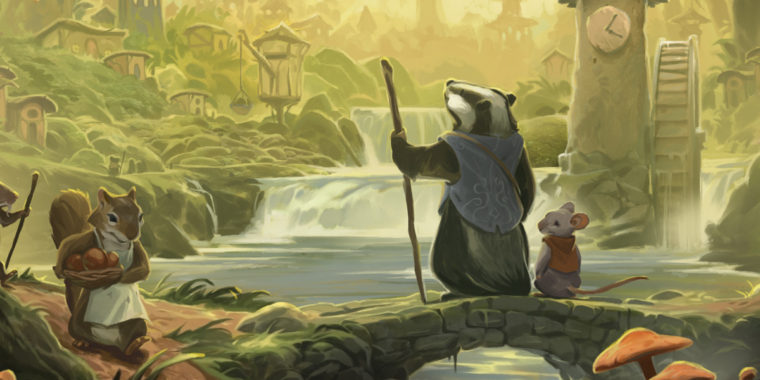 Around the Ever Tree the critters of the forest have prospered. A new year comes, and it is time to spread. To settle new places, build new cities, and attract critters to live there. Can you construct a city that doesn’t just prosper, but is a true home to all?

Everdell is a worker placement game blended with engine building elements. In it players will collect resources and cards, and use them to place constructions or critters to create their own city. The player with the most points at the end of the game wins.

Gameplay happens in two areas. The first is the central board, which consists of locations around a quite large 3D Ever Tree. Here players can place workers to collect resources, select face up building and critter cards, claim objectives or receive their new season rewards. The second is the players own city, which is a collection of Construction and Critter Cards.

During their turn players will be choosing one of three actions; Place a Worker, Play a Card or Prepare for Season. Place a Worker allows the player to claim a locations resources by putting a worker there.  Locations can be either exclusive or shared. Exclusive locations can take only one worker at a time, whereas shared locations can accommodate as many workers as needed.

Play a card is how players add constructions and critters to their city. Each player will have a hand of cards, while a selection of cards are also available on the board. The player selects a card from either their hand or the board and, after paying for it, places it into their city tableau. Some cards will grant immediate benefits, while others come into play later.

Cards come in two types. Constructions are buildings and other places which are brought into play by using the listed resources. They have a variety of abilities, from one off effects, to ongoing bonuses, or even providing additional worker placement locations. Critter cards are those who live in the city. They can be paid for using either the listed berry amount, or by having the corresponding construction card in the player’s city. Much like constructions, critters grant a range of abilities.

Prepare for season is used by the player to take all their workers placed on locations back. Doing so activates the next season bonuses for that player. This consists of either one or two additional workers, and depending on the season, a bonus activation of production cards or additional cards into their hand. This action needs to be used sparingly, as a player only gets four seasons to build their city in.

After every player has played out their last season points are calculated. Listed points on Critter and Construction Cards are totalled. Any Event points, as well as additional points from items such as prosperity cards, are also added. The player with the highest total wins.

Everdell is a surprising package. Its artwork is cute and charming, and has a whimsical storybook feel to it. But this is a dastardly trick, as the gameplay sits in stark contrast to the fuzzy, adorable critters. The focus is as much on maximising what a player can get out of a season, as building the optimal city engine. This litters the game with those fantastically agonising moments where players are wracking their brains over what to do, and when.

Finding the links between the visible Meadow cards, what is in the player’s hand, and the available resource spaces to chain together some truly inspired actions is equally exciting and harrowing. Players have the opportunity to put into action some intricate plans, that are just as likely to be ruined as other players take those resource spots or cards. 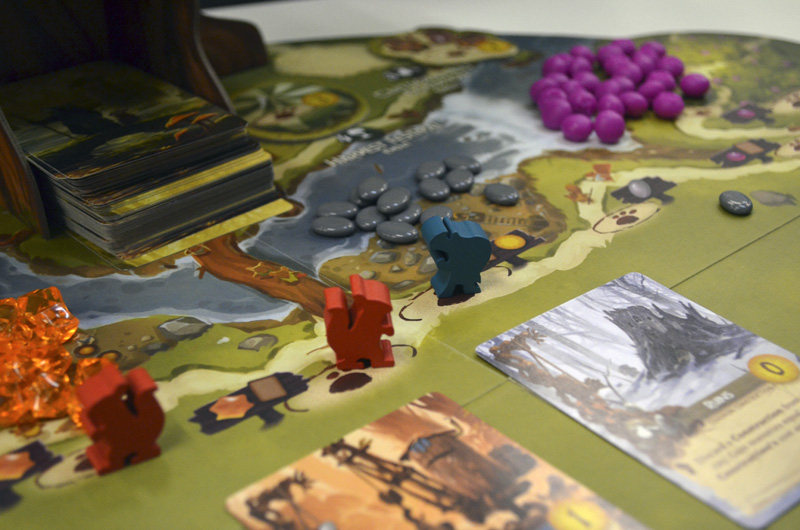 There is a real undercurrent of forward thinking which permeates every facet of Everdell. Players only have limited space in their city, so do they try to fill it up or go for a few high value cards? Can achieving certain Events line up with the process of building, or do the players focus solely on one facet? It’s these kinds of decisions which really make Everdell engaging and challenging.

The physical elements are really well made and designed. Choosing a rounded shape for the central board makes the play space feel organic, and complements the sizable 3D Ever Tree. Card illustrations are detailed and charming, and offer a look into the world of these cute little critters. They also help to attach a narrative to the city being built.

In fact I can only fault Everdell for two things. Unfortunately they are somewhat glaring issues which, in one case, stares you in the face.

From a production standpoint Everdell is extremely ambitious. The Ever Tree is a real focal point. And while it is admirable that such an inclusion has been integrated into the gameplay, it just as often gets in the way of play as complements it. Depending on where everyone sits, Event cards on the branches can be too out of the way for some players, the main deck can be obscured, and this towering cardboard perennial seriously limits player positioning around the table.

The rule book does a great job of covering all the portions of the game, and can go into some relevant detail about how elements work. However one of the main pillars of how the game plays is so clumsily laid out that it can throw all the rest of the rules out of whack. The part is question is the seasons, more specifically the Prepare for season action. 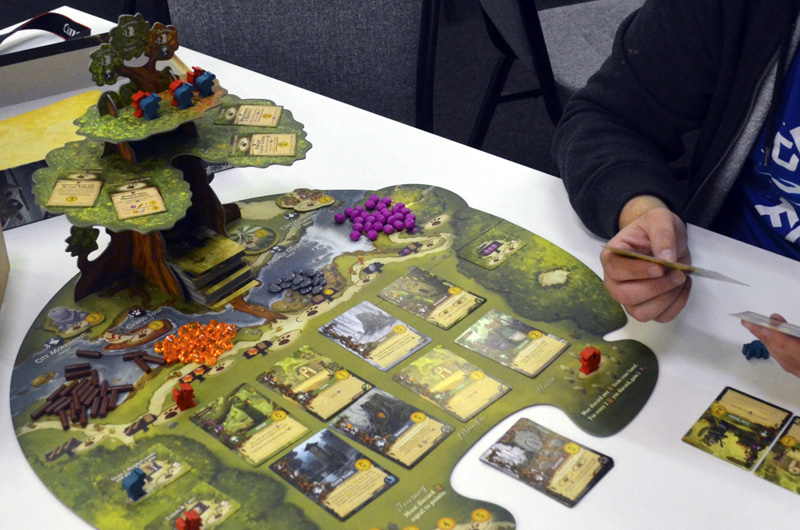 How this action fits into the overall framework is not explained in a way which is immediately understandable. As such I have seen (and played it this way the first time I played) people misunderstand and treat Prepare for season as a kind of end of round indicator. Players would declare Prepare for season, then wait for the other players to finish all their actions before everyone moved onto the next season together.

This isn’t how seasons work, with each player moving through the seasons at their own speed.  So while one player is in Spring another could be in Summer. I can see how this is confusing; seasons in the real world happen independent of where everyone is at. But in a gameplay sense a lot of the planning and engine elements hinge on the seasons working as intended. And I don’t think the rules communicate the structure, or the importance of it, enough.

There are other, minor quibbles. Some of the cards can be a bit busy, with lots of little icons or explanatory text. Plus remembering, let alone accessing, placement spots in other player’s cities can be difficult. Then there are the twig resources, which have a penchant for just rolling straight off the board.

Still, once players have overcome any misunderstandings in the rules and come to grips with how to play, Everdell is immensely exciting. Its cute exterior belies an intense engine building and thought provoking worker placement experience. Putting together a city is enjoyable, with an extra challenge in creating one which utilises the engine aspect smartly. Some players will struggle to wrap their heads around the seasons mechanic, as well as when or where to activate some abilities. But Everdell is bound to appeal to a wide variety of players with its charming visuals and involved gameplay.

Everdell is designed by James A. Wilson and published by Starling Games. Kickstarter backers have it now, and it is available soon online or from good retailers.