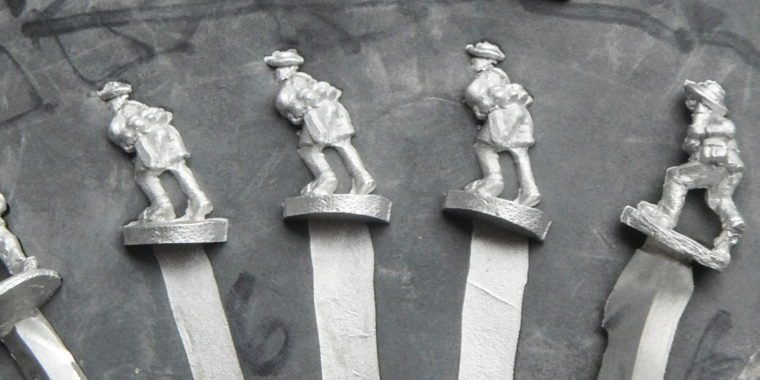 This article originally appeared in Issue 4 of The Campaigner, published in 2013. The issue is still available as digital download or in limited print stock.

Miniatures are a large part of the tabletop wargames hobby. They allow us to visualise what is happening on a battlefield, inspire us to paint and create, and get us excited to explore a system. But how much do you know about the process of how a miniature is produced? This issue James Tiffin from Flashpoint Miniatures takes us through the basics of the production cycle.

In an article intended to outline the process of how miniatures are produced, where do I start? This article will primarily outline the production process, though this is only a small segment of the larger business of professionally manufacturing miniatures.

A miniature starts as an idea, one that fulfils a job within a miniatures range. The figures are conceptualised by what might need to be added to the range, from groups like infantry figures or heavy-weapons crews to single models like specialists and leaders.

For instance, Flashpoint Miniatures has recently commissioned a half-dozen sculpts to be done to flesh out our range of 15mm ‘Vietnam-period’ USMC. We have five suitable sculpts in our catalogue already, but only three will be useful for the platoon packs of ‘early-war Marines’ that we want to distribute. The remaining two models (a Marine RTO, and a Marine without a helmet) don’t really represent a standard Marine very well, and are more like ‘personality’ pieces. Therefore we will need additional sculpts to include in the pack.

These packs will ultimately be used to create 40-plus man platoons. With the three sculpts already selected we decided that another three ‘rifleman’ sculpts should be commissioned. This would provide enough variety when a platoon was formed on the table.

Since we are already requiring these three sculpts, we look into what other additional miniatures may be needed. Looking at the heavy-weapon miniature options we decide that a kneeling model would make a perfect mortar crewman. Early-war USMC platoons often had a 60mm mortar as part of the ‘weapons squad’. An additional sculpt, ‘Figure 4’, is planned.

Another kneeling sculpt, this time a figure holding binoculars, is considered. This could act as either an additional mortar crewman or a Forward Observer in ‘later-war’ packs. This additional sculpt, ‘Figure 5’, is planned.

One more sculpt is required. An engineer marine with a mine-detector would be a useful and interesting addition. With a little forethought the model could also be generic enough to be used as a US Army figure. The last sculpt, ‘Figure 6’, is planned.

This should be a good start. The sculptor should be able to complete a job of this size quite quickly. A detailed description is created of what we want from the sculpts, and then sent to a figure sculptor.

This article and many more are in Issue 4. The issue is still available as a digital download.