Oh no! The Fire Chief of Tinderbox has gone missing, and the town is up in flames! Now is the time for the Fire Wardens to prove their mettle and gather support for their shot at the top job. Will the Wardens save the day, or will Tinderbox become a smouldering ruin?

The Brigade is a competitive area control game for 2-4 players. Each player takes control of a Fire Warden and the resources under their command, as they travel the town of Tinderbox dousing fires. Putting out fires adds Renown to tiles, which can become loyal to the player. The player who gains the Loyalty of a certain number of tiles is declared the winner.

Unless, of course, the town burns to the ground.

Play happens on Tinderbox, which is made up of a 6×6 square of tiles. At the centre is the Pyromancer University, who may or may not be the cause of the ongoing blaze. At each corner are the player’s fire houses. The rest of the board is building tiles which are placed randomly. These tiles are each aligned with one of four factions.

At the start of each turn an Event card is revealed. Usually these show where fires ignite, or increase if that tile is already ablaze. In some cases the wind picks up, spreading fires in indicated directions. Or, if really lucky, it’s a beneficial event which involves boons for the players. 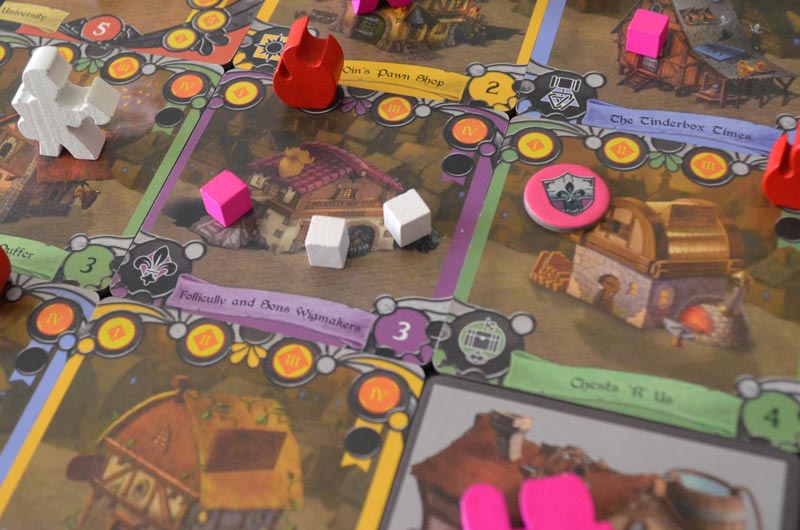 Tiles contain a Flame Track, which indicate the level of burneyness currently afflicting a location. Should the fire marker on a Flame Track exceed the maximum level, the tile is destroyed. If too many tiles are destroyed the town is evacuated and the game ends immediately.

Players gain four actions each turn. These can be used to move their fire fighting assets and instruct them to extinguish fires, as well as manage water, recruit new crew members or upgrade. All actions, except the upgrade action, can be performed more than once during a turn.

At their disposal each player has a Brigade and a Water Wagon, both of which can move around Tinderbox. The Brigade can be used to extinguish fires, while the Water Wagon is used to transport additional water. When occupied by a Brigade or Water Wagon a tiles Fire Track cannot increase during the event phase.

Each player has a player board which contains Crew Member, Water Wagon Capacity and Leadership tracks, as well as the current water contained in the wagon. Upgrading allows the player to increase one of these tracks, thereby adding to their fire fighting ability. Reaching the end of each track also grants an additional bonus. 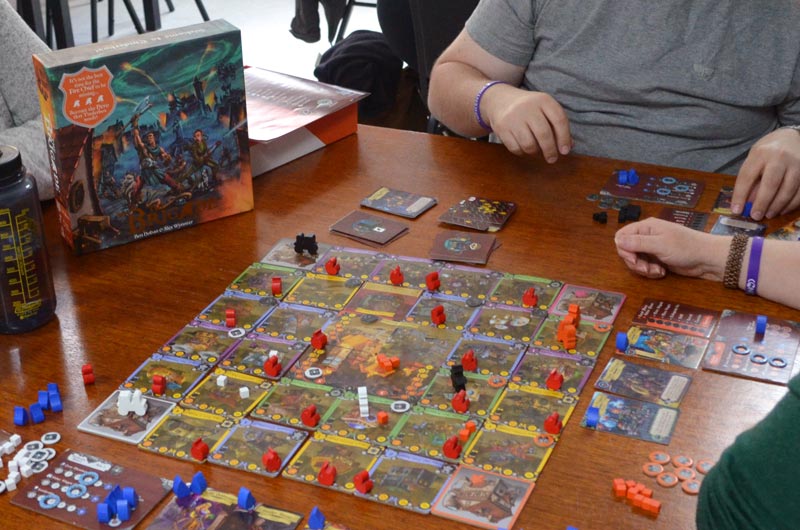 Crew can be recruited into the players Brigade, which is headed up by their Fire Warden. These fire fighters carry extra water, as well as put valuable abilities at the player’s disposal. However these abilities can only be used if the player has the loyalty of the faction that crew member is part of.

There are four ways for the game to end. As soon as a player gains the loyalty of five tiles of the same faction, or three University tiles, the game ends and that player is the winner. Similarly, if a player gains the loyalty of five different factions they also win. If a certain number of tiles are destroyed, or all fires are doused, then the game ends and players score points based on tile Loyalty.

Where The Brigade impresses is with its ability to bring heavy game concepts to a light format. Players have a lot of choices on what they do, but they all fall into the basic categories of moving, managing water or managing their crew. This means that once a player understands the basics of the actions they can begin to reliably chain them together to achieve different results.

So too there is a bit going on, with fires constantly breaking out as well as an ever changing player and board states. However everything is presented in a manageable way in full view of every player. There is no hidden information, so players can easily understand how and why their opponents have taken certain actions, and begin to readjust their plans if needed. 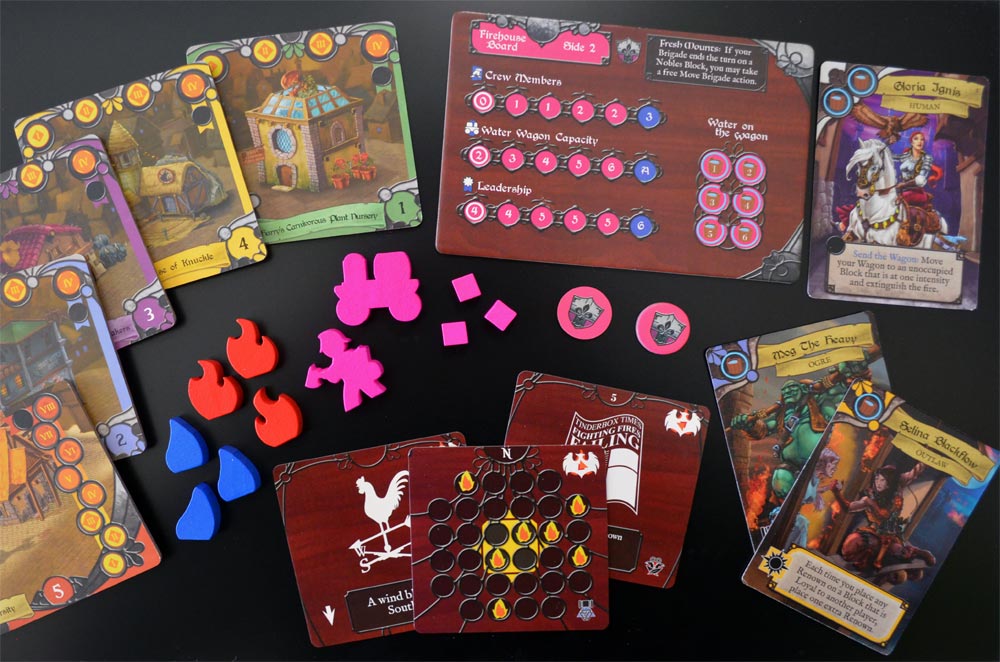 The production quality of the game pieces is really impressive. There are custom meeples for the Brigade and Water Wagon, as well as shaped water and flame tokens. The tiles are nicely varied, with unique building images and names. Most of the tokens and meeples placed on the board are vibrant and stand out against the tile art, which makes the game state easy to understand. So too the player boards are straight forward and communicate the information they need to effortlessly.

There are some rough edges with The Brigade. The rules are well explained, though the rule book is a little puzzling to work through. Some information isn’t in the section you would think it would, or should, be in. Which makes answering some questions a little harder than it necessarily needs to be.  The layout is good though, with a generous text size chosen.

While the fire and boon event cards are easy to understand, it can take a bit of work for some people to wrap their heads around the wind events. For example, if it blows from the South players start at the bottom and move up, adding fire to tiles below those already ablaze. Given practice it make sense, but its understanding the initial two directions facet which seems to cause a lot of players to slip up.

Then there are the little stumbles in production. The black player colour doesn’t stand out quite as much on the board as the other options, which can lead to the player’s progress sometimes being overlooked. And while amazingly illustrated, the Crew cards colours look muddy and feel rough. Possibly because of the linen stock used in their production. Which I admit is perplexing as it looks like the same stock was used on the Event cards and I don’t have this issue with them.

The Brigade is a fascinating reinterpretation of heavy mechanics into a light and accessible package. It has a large game look, with lots of tokens, tiles and cards. But its straight forward approach to mechanics, and integrating these with the theme, means that it is a quick and fun experience. Players will likely spend their first game getting to grips with how it works, then immediately dive back in for another go.

I think that this game would be great for those trying to ease players into more in-depth titles. It has an analogous table presence, while being fast to learn and easy to engage with. Alternatively those players looking for a quick stop-gap, which isn’t just another abstract or card game, will find The Brigade probably fulfils all of their needs.

The Brigade is out now and is arriving with Kickstarter backers. Red Genie Games have started working on a Second Edition which may see a store or online retail release. Keep up-to-date with The Brigade on the Red Genie Games website.