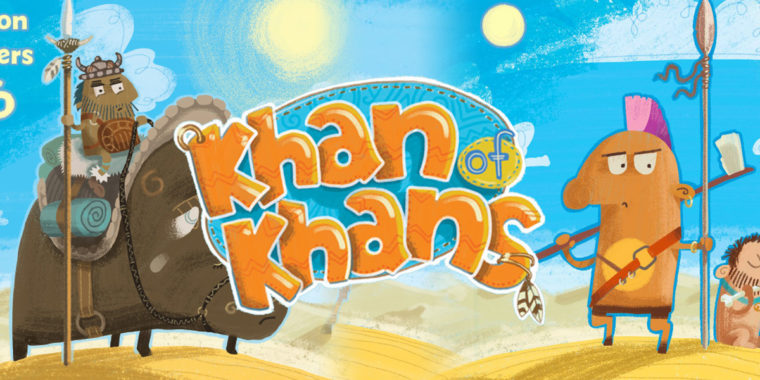 Your tribe wanders the sands, over dune, through biting wind, ever in search of the basics of life. Other tribes tread the same path, many people amongst the barren granular hills of the desert. But there are those who dwell outside the sands, cities full of people, with poorly guarded farmlands. They are easily raided, watching helplessly as you carry their cattle away. Sometimes, though, it is easier and more lucrative to raid the raiders.

Khan of Khans puts players in charge of one of the great tribes of Prax. Players take turns drawing cards from a selection of decks. Some cards contain the prized cows, used to score points. While others yield helpful cards like protective champions or divine blessings. But players must beware, for other cards contain dire consequences, such as the loss of one or all of the players raided cows!

Players will just as often be stealing the point scoring Raid cards from their opponents, as much as they will be drawing from the decks. However, the players can secure their positions by taking all the Raid cards in their hand and corralling them. This protects them from being stolen by other players, but each tribe has a limited number of corals available to them.

The game ends when all the decks have been drawn. Points from the Raid cards, as well as any blessings, are totalled and the player with the highest score is named the Khan of Khans and the greatest Khan in all of Prax. 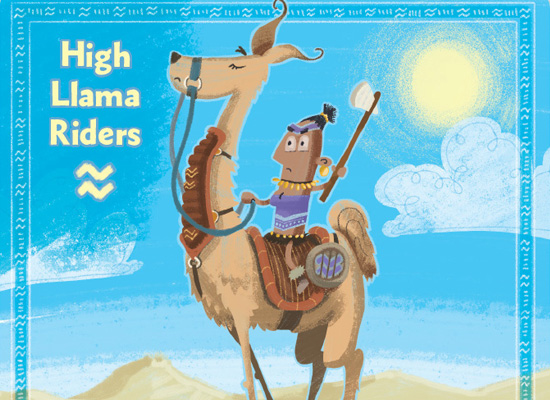 Set up of the game isn’t quick. There are ten individual decks of cards which need to be sorted and placed around the map. The locations for them are clearly marked however, so if you are one of those super-organised game box people then your set up time will be greatly decreased. Each player also needs to be dealt one of the tribe cards, and then collect the relevant corrals and tokens.

In game play, though, Khan of Khans is swift. It will only take one or two turns for players to get a handle on the four action choices they have. Especially since two of the choices are very situation dependent. This means that the action picks up quite quickly, and the challenges and choices present themselves almost immediately.

Randomness plays a large part in the game, with players choosing from decks of cards and having to live with the outcome. But there is still a lot of strategy possible. Players will begin to get a feel for when to corral their hand, or in what instances they are pushing their luck. Those players who enjoy a more involved experience will find the challenge of assessing what is left in the various decks keeps them engaged.

The randomness can oftentimes yield completely dire results, such as the total loss of a handful of great Raid cards. But the fact that all participants are ultimately affected by the same random outcomes means that players won’t feel cheated by losing a great hand to a bad draw. On the contrary, it is quite easy to create another great hand after a disastrous loss. Plus it feels great to see bad luck befall your opponents! 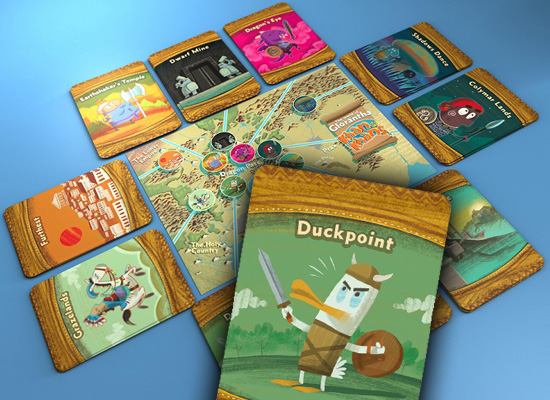 Things seem a little wonky with the tribe cards. Some tribes appear to have far more useful powers than others. Also, players are at a huge disadvantage if they don’t understand how to use their tribe’s power and so do not utilise it while another player does theirs. This is fixed somewhat once players have had a bit of experience with Khan of Khans, but especially for casual or beginner players, the complexity of the tribe abilities may be off-putting.

While the rules are quick and easy to learn, the game itself may take a few turns before anything really happens. Players may go for two or three draws before they get a card they can keep or use. This makes the beginning of the game seem a little stilted, especially when compared to the mayhem and joy the game illicit once it gets going.

The artwork is fantastic. Each card bursts with charm and irreverence, the cartoonish artwork not only drawing the players in but providing a foil to the sometimes harsh game play. It is a really endearing and imaginative interpretation of the world of Glorantha.

Khan of Khans is an interesting and fun interpretation of a push-your-luck game. While it feels a little underdone in some places, overall it is an enjoyable and engaging game which will appeal to a wide range of ages and player experience. Replayability is quite high as the multiple decks means that no two games are going to be quite the same, and the number of players scales really well. If you are looking for a quick and easy game that offers both challenges and entertainment then Khan of Khans is an excellent choice.

Khan of Khans is designed by Reiner Knizia, who is best known for titles such as Lost Cities, Amun-Re, and Modern Art. The artwork is created by Ian O’Toole, who has also worked on Hand of Fate: Ordeals, Starfall and The Gallerist.  It is published by Chaosium Inc and available now on their website, or with some retailers.