Being a fisherman, filling your boat with a catch is the best thing that can happen to you. That day is today. But it isn’t going to last. So many fish are now onboard that your poor vessel is beginning to sink! Your only hope is to get rid of all the fish before you find yourself at the bottom of the ocean. Luckily, all the other nearby fishermen have to deal with the same problem.

No Fish! is a family card game for 2-6 players, from ages five and up. It is designed by Sean Carroll at 93 Made Games, and illustrated by Jenny Cuthbert. The aim is to get rid of all the cards in your hand first, thereby emptying your boat of its catch. Whoever discards all their cards first is the winner.

There are two types of cards, Standard Fish and Special Fish. Standard Fish cards display one of four different types of fish (Goldfish, Dogfish, Rainbowfish and Clownfish), as well as a number between one and ten, on them. Special Fish cards also have four types (Starfish, Toadfish, Flyingfish (sic) and Lionfish) and permit special actions. 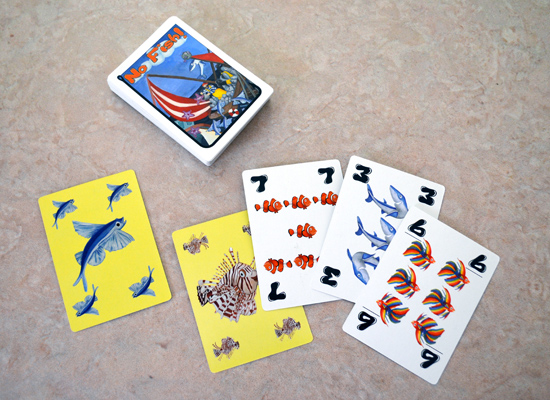 Players hold their hand facing outward, so that they cannot see what fish cards they have. On their turn they guess a number between one and ten, or a Special Fish type. If the player possesses that number or Special Fish card they get to discard all of that type of card. If they don’t possess any of the card they nominated, the other players call out “No Fish!” and the player has to draw an additional card to add to their hand. Players who successfully guess and discard fish cards can then either have another, free, guess or take a Special Fish card from another players hand and utilise its special ability before discarding it.

The artwork is quite bold and simple. The fish look friendly, and not at all concerned that they have been captured by fishermen. Each fish type looks quite individual, so it shouldn’t be hard to tell the difference between them.

Since the rules are so simple, it doesn’t take long at all for adult players to grasp how it works. Much younger players may struggle, and would likely need some older or more experienced players involved to moderate the game. This isn’t a bad thing, but don’t expect a group of five-to-eleven year olds to play this for the first time unassisted. In the very least, the temptation to look at their cards is probably too great for some children starting out. 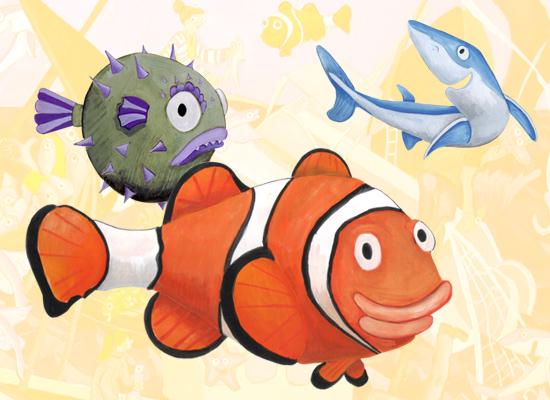 Overall I cannot fault the game. It isn’t particularly complex, so serious tabletop gamers looking for a challenge will tire of No Fish! quite quickly. But I don’t think that they are really the market for this. It seems to be aimed at children, families, and casual players just looking for an easy to learn game to fill in twenty minutes. In this regard No Fish! is a quick, fun game for the entire family, and would sit well in any game collection.

No Fish! is scheduled to go onto Kickstarter in the second half of January this year. You can keep up-to-date with what is happening in the world of No Fish! on the 93 Made Games website at www.93madegames.com.au